Malaysia Airports Holdings Bhd (MAHB) has just wrapped up its best financial year, suggesting that the airport operator is finally returning to a period of rapid growth last seen before FY2015. 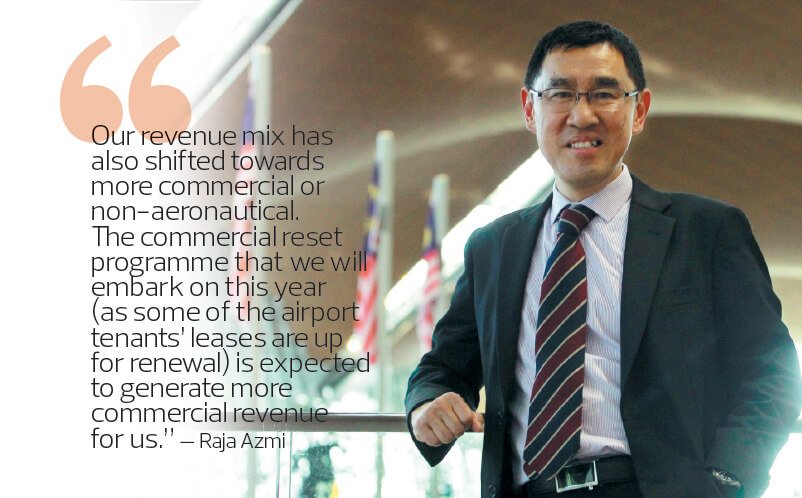 The strong performance can be attributed to a gain on the fair value of investment in GMR Hyderabad International Airport Ltd (GHIAL) amounting to RM258.4 million, but stripping out the gain, net profit for FY2018 was still nearly double the RM237.1 million registered in FY2017. MAHB holds an 11% stake in GHIAL.

In FY2015, net profit at the country’s biggest airport operator nosedived by 94% to RM40.1 million, on high finance cost and losses from its Turkish operations in Istanbul Sabiha Gokcen International Airport (ISG), which it wholly owns. The performance was also impacted by national carrier Malaysia Airlines Bhd’s restructuring, which went through a “hard reset” to emerge a smaller airline, while China passenger numbers had yet to fully recover from the twin tragedies of MH370 and MH17 in 2014.

But those days are over now, says MAHB group CEO Raja Azmi Raja Nazuddin. He expects FY2019 to be another good year for the group.

For one, ISG has turned the corner and is expected to break even this year.

“Our revenue mix has also shifted towards more commercial or non-aeronautical. The commercial reset programme that we will embark on this year [as some of the airport tenants’ leases are up for renewal] is expected to generate more commercial revenue for us,” he tells The Edge in an interview.

Non-aeronautical revenue includes income earned through the rental or operation of duty-free shops and offices, advertising and ground-handling concessions.

According to the 52-year-old, who had been acting group CEO for about six months until Jan 4, tenancy contracts at various airports in the country are due to expire.

Raja Azmi points out that in FY2017, passenger traffic at MAHB’s Malaysian airports of 96.6 million had been mainly driven by the international sector, which recorded 49.5 million passenger movements — an increase of 14.2% over FY2016.

Raja Azmi says the group plans to carry out long-overdue expansion at several airports in the country, including Penang International Airport and KLIA.

Malaysian Aviation Commission (Mavcom) executive chairman Dr Nungsari Ahmad Radhi told The Edge in an interview last December that instead of expanding its airports, MAHB should look at optimising the capacity of its existing assets for immediate relief.

To this, Raja Azmi says optimisation can only raise Penang Airport’s capacity to seven million passengers, which is still lower than the passenger traffic handled last year. “We hope to start expansion work at Penang Airport before the end of the year.

“KLIA, meanwhile, can handle 30 million passengers per year, which can be increased to 33 million through optimisation. Last year, KLIA handled 28 million passengers. So, expansion work needs to be done soon,” he adds.

Still, Raja Azmi recognises that much would depend on MAHB’s ongoing negotiations with the government to review the current operating agreement (OA).

Under the OA, the government is responsible for all capital expenditure (capex) for any airport expansion or development, while MAHB takes care of the maintenance expenses of the 39 airports in the country it manages.

“While we are working towards the extension of the OA, we are also working to review some of the terms of the existing OA to make it palatable for us to undertake some of the development capex. The review is ongoing and we hope to finalise the terms before the first half of this year,” says Raja Azmi.

An internal study conducted by MAHB shows that for the last 15 years, for every ringgit of development capex the airport operator asked from the government, less than 10% of the amount was granted.

“This cannot go on as some of the airports are nearing congestion, such as Kota Baru and Subang,” says Raja Azmi.

This year, MAHB will continue to work with Mavcom on a regulated asset base (RAB) framework, which provides a direct link between capital investment and the level of aeronautical charges the airport operator can impose on airport users.

“Under the framework, Mavcom will go through the intended capital investment for the period and there is a formula after considering our operating expenditure, depreciation cost, rate of return and our traffic forecast to derive the PSC (for the respective airports),” he explains. The RAB framework is due to be completed this year.

Meanwhile, Raja Azmi says MAHB will appoint a third party to come up with a study on the overall development of KLIA, which would include constructing a second satellite terminal building or simply providing interlinking services with klia2, which has a capacity to handle 45 million passengers per year but saw only 31.86 million passengers pass through last year.

“I don’t think that, in the near future, we can do both because the capex will be just too huge and the impact on the consumers will be too great.

“But eventually, the government will have to decide on the best option vis-à-vis the future, as well as the impact on passengers because the cost incurred will have a direct impact on the PSC,” says Raja Azmi, noting that the study should be completed by the third quarter of this year.

Nevertheless, KLIA may finally get its aerotrains and baggage-handling system replaced this year — more than 20 years after the airport opened its doors in June 1998. MAHB is looking to spend between RM500 million and RM600 million to replace the aerotrains and baggage-handling system over a three-year period as part of its asset replacement programme.

Another major initiative MAHB is undertaking is to extend its existing OA with the government by another 35 years to 2069 from 2034.

“We are in the midst of negotiations with the ministries of transport and finance to extend the current OA and we hope to get it signed by the first half of this year,” says Raja Azmi. Currently, MAHB has two OAs with the government — one is to operate KLIA and klia2, and the other to operate the remaining 38 airports in Malaysia.

The group is also looking to carve out 40% of the 100 sq km land bank surrounding KLIA under the current OA and for the land to be granted a lease of 99 years. “A longer lease period would benefit KLIA Aeropolis as tenants like Japan’s Mitsui Fudosan Co Ltd would want a longer tenure to recover their capex,” explains Raja Azmi.

On the government’s plan to break up MAHB’s airports in Malaysia into five regional clusters, he says nothing has been firmed up yet. “We can explore various permutations, but I will do whatever it takes to make sure that MAHB is not worse off. There shouldn’t be value disruption to the shareholders.

“Right now, there is a shift in (MAHB’s) role from pure operator to operator-cum-developer. There may be a huge requirement in the future for capex spending and we have to also consider vis-à-vis our capability to raise funds,” says Raja Azmi.

MAHB’s plans to improve the airports it manages are also in line with the implementation of the Quality of Service (QOS) scheme by Mavcom last year, where the airport operator runs the risk of paying penalties of up to 5.03% of aeronautical revenues in the event that its airports fail to meet minimum thresholds of service quality under the framework.

“We are investing heavily (to upgrade facilities) to make sure that by the time all the 28 elements under the QoS performance measure come onboard, we are ready for them,” says Raja Azmi.

This year, the QoS measure will be extended to three other airports — Langkawi, Subang and Kota Kinabalu.