Dataran Merdeka (Merdeka Square) is located in Kuala Lumpur, situated in front of the Sultan Abdul Samad Building. It was here the Union Flag was lowered and the Malayan flag hoisted for the first time at midnight on 31 August 1957.

Since 1957, Dataran Merdeka (Merdeka Square) has been the usual venue for the annual Merdeka Parade (National Day Parade).

A 95-metre flagpole, one of the tallest in the world, marks that spot at the Dataran Merdeka with a flat, round black marble plaque.

It is located at the southern end of the square. Nearby is also the original Kuala Lumpur KTM Station, which is still operational. However the main hub has recently been moved to KL Sentral in 2001.

On the other corner of the field, the Kuala Lumpur City Gallery and the National Textile Museum invite you to take another look at traditional textiles and the humble beginnings of the city. Dataran Merdeka
Here are some transportation options you can consider:

Kelana Jaya Line LRT: Take the LRT and stop at the Masjid Jamek LRT station. Dataran Merdeka is about 10 minutes walk from the LRT station.

Ampang Line LRT: Take the LRT and stop at the Masjid Jamek LRT station. Dataran Merdeka is about 10 minutes walk from the LRT station.

RapidKL Bus: The RapidKL Bus No U4, U7, U13, U14, U209 will stop at Jalan Raja bus stop. Dataran Merdeka is within short walking distance.

Pictures of Dataran Merdeka and surroundings 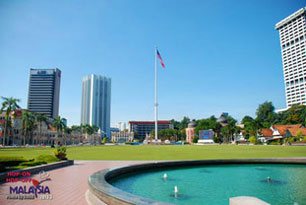 The field at the Merdeka Square’s immediate vicinity was officially renamed ‘Dataran Merdeka’ on 1 January 1990 in conjunction of Visit Malaysia Year 1990. 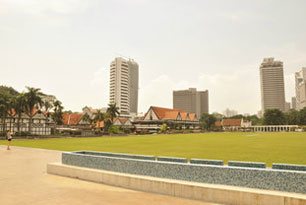 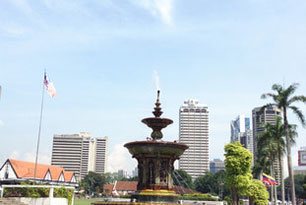 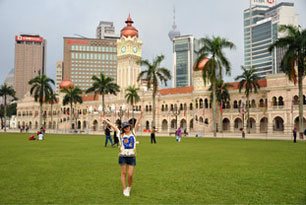 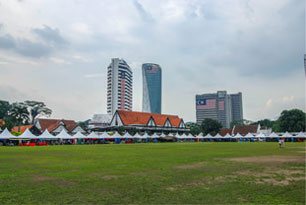 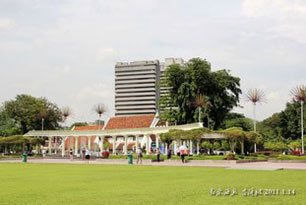