A new departure levy for air passengers leaving Malaysia from June 1, 2019 has met with criticism that the Pakatan Harapan government is making air travel more expensive, putting an extra burden on the people who are already paying passenger service charges (PSCs), fuel surcharge and a regulatory service charge.

There are concerns that the new levy could also put a damper on the country’s tourist arrivals, which have missed tourist arrival and receipt targets in the last five years. 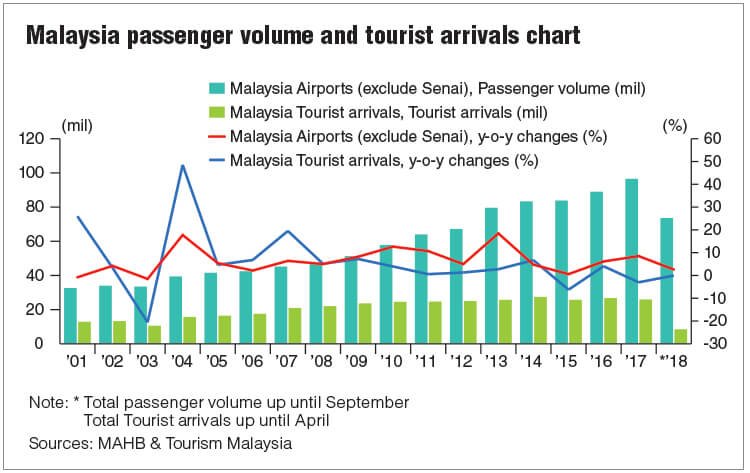 As recent as December last year, a move by the Malaysian Aviation Commission (Mavcom) to raise the PSCs for international flights, excluding Asean, operating at klia2 by RM23 to RM73 per passenger starting Jan 1, 2018 was seen to have drawn the ire of lawmakers like Tony Pua, AirAsia Group Bhd group chief executive officer Tan Sri Tony Fernandes and the Malaysian Association of Tour and Travel Agents who believe that a rate hike would bring additional burden to travellers who fly low-cost to begin with.

This time, the government is proposing to impose a departure levy of RM20 on passengers flying to Asean countries and RM40 on those travelling to other countries excluding Asean starting June 1. This is in addition to the current PSCs of RM35 per departing passenger to Asean destinations and RM73 for international flights beyond Asean.

However, previous passenger traffic statistics from Malaysia Airports Holdings Bhd (MAHB) suggested that any increase in airport taxes in the past had not led to a corresponding drop in traffic at airports.

While it remains to be seen whether the new departure levy would encourage domestic tourism, as envisaged by the Pakatan government, it would at least widen its revenue base.

In its report dated Nov 4, Maybank Investment Bank Research estimated that the new levy would result in over RM766 million of revenue per year. It said with the additional funds, the government will be able to hire and train more talent, enhance equipment and systems.

“The government expenditure to manage the entire aviation industry was RM1.13 billion in 2017 and is expected to grow by 4% per year, we estimate,” it noted, adding that such aviation policy is more equitable whereby users will now pay for the industry’s operating expenses as opposed to taxpayers.

The additional levy would see Malaysia closing the gap with its peers in Singapore and Cambodia and losing its status as one of the countries with the lowest airport taxes regionally and globally — something that the government has been proud of in its efforts to turn Kuala Lumpur International Airport (KLIA) into a regional aviation hub since 1998.

Singapore revised its airport tax and government charges for outbound passengers on July 1 to S$47.30 (RM143.50) per passenger, resulting in Changi Airport becoming the most expensive airport in the region to fly out of.

In October, Mavcom’s newly appointed chairman Dr Nungsari Ahmad Radhi told The Edge Financial Daily in an interview that KLIA had yet to become a regional aviation hub the likes of Singapore’s Changi and Don Mueang International Airport in Bangkok, Thailand.

In October 2016, when Mavcom embarked on its mission to gradually equalise the PSCs at KLIA and klia2, it pointed out that after the revised structure, Malaysia’s PSCs remained the lowest among airports in Asia, except for Jogjakarta.