The centre will allow AirAsia’s Ground Team Red (GTR) to track aircraft handling by having real-time information on passenger boarding, baggage reconciliation and ramp-loading compiled on a digital dashboard at the control centre. 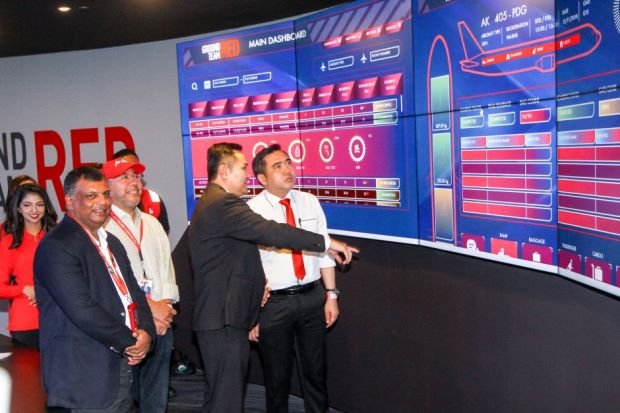 Fernandes (second from left), Kamarudin (centre) and Loke (far right) are given a tour of the Ground Team Red control centre.

Loke was given a briefing on the way the centre compiles different data and identifies any soft spots in the aircraft’s turnaround process.

The minister was also shown the control centre’s virtual reality training chamber, which features six training modules for handling different aspects of ground handling services and even tried his hand at aircraft marshalling.

Congratulating the airline for its innovation, Loke said digitalisation was the way to go for the aviation industry.

“We want to make sure our turnaround time is fast, as AirAsia has targeted and I fully support. I want the same for arrivals as well,” Loke said, relating a personal experience on how it’d taken 45 minutes from touchdown before he could reclaim his luggage a week before.

Fernandes said it was a momentous occasion for him and the airline as the centre’s concept, which had only been talked about, had finally come to fruition.

“This is just step one, we’re going to start putting in artificial intelligence and machine learning, which will aid us tremendously in reducing turnaround times and cost,” Fernandes said.