Privatising airports is something the government is considering, as it is in no position to fund future airport developments for now.

That is understandable, given that the country’s debt and liabilities has soared to over RM1 trillion and the government does not want to put a further strain on its finances. 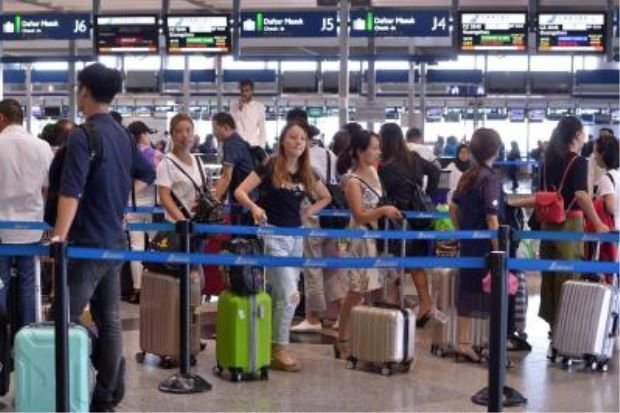 Check in at KLIA‘s Departure Hall

So, it wants to engage with the private sector to be part of this future development.

The one man who could be grinning from ear to ear is Tan Sri Tony Fernandes, the chief of AirAsia Group.

He has been wanting a dedicated terminal for low-cost travel, and has been fighting the cause for more than a decade now.

His initial plan was to build a low-cost air terminal in Nilai, but the idea was shot down.

Instead, the LCCT was put up for his airline’s operations.

Later, he had to shift the airline’s operations to klia2, an airport which does not quite fit his vision of a “low-cost air terminal”.

Things are beginning to look brighter for Fernandes, especially with Thursday’s announcement by Transport Minister Anthony Loke that the government is encouraging the private sector to invest in airport development and expansion throughout the country.

Surely, Fernandes and other players may come in to develop and upgrade airports throughout the country.

While he may be cheering, airport operator Malaysia Airports Holdings Bhd (MAHB) may not be sharing his excitement, as it could potentially lose rights to maintain some airports in the country and that could have an impact on its future earnings. MAHB currently operates almost all the airports in the country, 39 out of 40. The one other player operates the Senai airport.

Inevitably, MAHB has to come to terms with the privatisation of airports, as it is a global phenomenon.

Privatisation of airports globally has been ongoing since the 1980s, as governments get private companies to fund expansion.

A report says British airports were privatised as early as the mid-1980s, and this trend caught up in Europe, where half of its airports have some form of private ownership.

The case is the same in Australia, where airports are owned by a consortium of private companies, and the same report says the Gold Coast airport is one of the most successful privatisation models.

India has also privatised some of its airports and even MAHB used to be a shareholder in Delhi, and is now negotiating to sell off its stake in Hyderabad Airport. MAHB owns and operates the Istanbul Sabiha Gökçen International Airport in Turkey.

Globally, with the growing demand for air travel, the International Air Transport Association (IATA) predicts that US$1.2-US$1.5 trillion would be spent up to 2030 on airport infrastructure development.

Traffic growth in Asia is exponential and will continue to rise into the next decade.

With all these predictions, it is no wonder that airport infrastructure development has become more vogue and governments across the globe cannot keep pumping money into their developments. Increasingly, the private sector is becoming involved.

ACI says about 14% of airports globally have some form of privatisation.

So, Loke is not off-tangent when he says that he wants the private sector to be involved.

MAHB is partly owned by the government via Khazanah Nasional Bhd.

Malaysia’s biggest gateway to the world is the Kuala Lumpur International Airport (KLIA) and it is already bursting through the seams with robust air passenger traffic growth.

Talk of expansion has been making the rounds for some time now, but a decision is still pending if a new satellite building is necessary to cater to the traffic growth.

A total of 96.54 million people passed through all the 39 airports that MAHB manages last year. That represented a growth of 8.5%, the second-highest increase recorded in the last 20 years. International passenger movements grew 14.1% to 49.4 million passengers over 2016, while domestic traffic rose 3.2% to 47.14 million.

KLIA was ranked the 12th most connected airport globally as per OAG’s Megahubs International Index 2018.

For the longest time, building or expansion of airports fell under the purview of the government, which uses the development expenditure for that purpose.

In the case of klia2, MAHB did foot the bill initially to build the airport, but was compensated in some form and also has seen its concession period extended by 35 years from 2034 to 2069.

However, the finer points of the concession may not have been finalised, as it takes a long time to hammer out such agreements.

Privatising airports is an option to address future funding for expansion and while there are some success stories, there are others which have burdened airlines and travellers.

But before the government can allow the private sector to be part of future airport development, it has to first look into the agreements binding itself with MAHB, which is a profitable company.

Since airports are “asset-intensive businesses” with long gestation periods, it may take many years before the private companies can see returns on its investments.

Private companies that put in money would want to see returns. A report quoting a study done by the Reason Foundation says that “40 of the highest revenue earning airports were fully or partially privatised, while 25 of those were amongst the world’s best airports”.

So, opening the floodgates to private companies may be good to lift the burden off the government, but it should not be seen as a “short-term revenue raising option for governments, but a long-term vision for economic development instead”.

As IATA put it, the success of privatisation should be measured by service levels and cost-effectiveness, not by financial gains for governments or investors.

The travelling public must not in any way be burdened with higher charges, nor the airlines.

The downward revision on current charges is also pending.

So, the right framework needs to be put in place for privatisation and checks and balances.

The regulator will have to be more proactive and vigilant in its enforcement so that the travelling public’s interest is protected since the traveller is paying for its upkeep.