FOR residents of Taman Saujana KLIA and Kota Warisan, aircraft noise has become the bane of their life.

The thunderous noise would cause roof tiles, metal grilles to vibrate and car alarms to go off, such daily torture is worse than a nightmare, as they cannot even sleep. 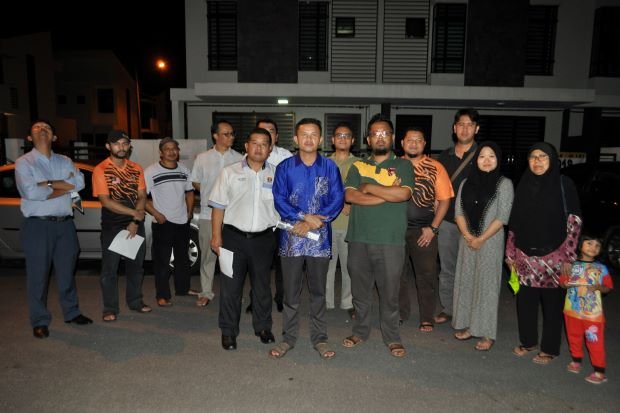 One resident in Taman Saujana KLIA said she had not had a good night’s sleep since.

Jolted out of slumber at 3am almost every day by the sound of screaming aircraft engines, she said the lack of sleep is taking a toll on her.

“We have to put up with the aircraft noise round the clock, just imagine having to live in such environment. There is no rest for us,” said Syukri.

“The noise has been bothering me from day one. If I had known, I would never have chosen to live here,” said Rokeman.

Ricky Yeung, 47, an airline pilot who has lived here for 12 years, said the issue of aircraft noise worsened when Kuala Lumpur International Airport 2 (klia2) started operations and traffic increased since 2014.

He said the noise is from aircraft taking off at runway 32R, one of the three runways in KLIA.

Aircraft departing from this runway is required to follow a flight path that turns right after take-off, which sees it flying over Taman Saujana KLIA, Kota Warisan among several residential areas.

Yeung suggested that aircraft taking off at this runway could maintain direction at 326 degrees North West instead of taking a right turn, or for all take-offs at runway 32R be shifted to runway 32L.

Another proposal is to impose a curfew for night takeoffs.

In reply to residents’ complaints, a Civil Aviation Authority of Malaysia (CAAM) spokesman said the agency was sympathetic towards their plight as Kota Warisan and Saujana KLIA were located on the fringes of gazetted airport perimeters where residential development was not permitted.

In its email reply, CAAM said residents should have been fully aware when acquiring residential property close to any international airport, there was always the possibility of noise pollution.

On the operational suggestions put forward by Yeung, CAAM explained that the current mode of operation used for departures was the Simultaneous Independent Departures Operations (Sido), which required aircraft departing from adjacent runways to be on diverging tracks after getting airborne.

“This means only one aircraft would be able to depart at a time from any one of KLIA’s three runways, obliterating efficiency and causing delays in flight departure,” he said, adding that aircraft awaiting their turn to take off would result in additional fuel burn and carbon emission.

“It must be noted for all airlines, fuel represents the biggest operational expense. An average medium-sized jet (B737 or A320) burns between RM400 and RM500 worth of fuel per minute.

“As such, delaying an aircraft would cost any airline an additional RM1,000 per flight. If there are 300 flights involved, that would translate to RM300,000 in additional fuel cost per day,” said CAAM.

On suggestion that departures should only be limited to runway 32L, CAAM explained in the original airport design, runway 32L was for landings and runway 32R for departures.

Switching the landing and departure mode would result in departing aircraft having to taxi 6km from the terminal building to the holding point at runway 32L, taking anything between 15 to 30 minutes.

Aircraft landing on runway 32R would have to make a sharp left hand turn to join the main taxiway, bringing the aircraft to almost a standstill especially for the wide-bodied aircraft. This would cause a jam on the runway and in turn reduce airport capacity, he explained.

This means imposing a curfew at these hours would be a drawback to meeting the airport’s full capacity.

CAAM also noted that the combined capacity of KLIA and klia2 was now 75 million passengers per annum (mppa), while the target was 100 mppa. As such, the airport is considered to be still operating below capacity.

CAAM also advised residents that any changes to airport operation or curfews would require the decision of policy makers, referring to Transport Ministry or the Malaysian Aviation Commission.