AIRASIA X Bhd (AAX) is on track to post its second straight year of profit in the financial year just ended, but net profit is likely to come in lower than the previous year due to unfavourable exchange rates and a one-off provision for doubtful debts related to overdue legacy receivables. 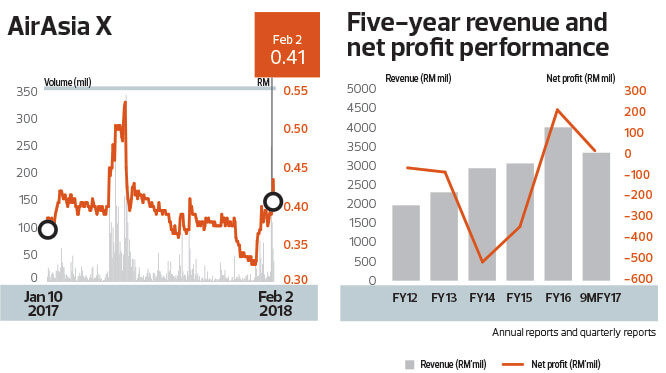 “Stripping out the provision, we reported a profit (in 3QFY2017). And we performed okay in 4QFY2017. Operationally, we have been doing very well as our cost per available seat kilometre (CASK) has come down. Our fares have also been steadily moving upward, considering that our seat capacity has increased by over 40% (since 2015), which is very tough,” the 40-year-old former investment banker tells The Edge in an interview at AAX’s Sepang headquarters.

Benyamin says the provision for bad debts was related to its charter and cargo contracts. “These are contracts where the customers agreed to pay a certain sum (to AAX) for carrying a certain amount of cargo. Unfortunately, they didn’t meet that level of cargo (thus, the dispute over the amount due).

“This was a legacy issue that we had kept on our balance sheet for a while. These were contracts that we were trying to recover, and rather than allowing them to sit on our books year after year, we decided to write them off. But that does not mean we are not pursuing the recoverability of those doubtful debts.

“We have seen improvement in recovering one of them and a few others are still ongoing. The key thing is to come clean now. We don’t want anymore surprises going forward in terms of numbers,” he adds.

Benyamin, who took the reins of the long-haul, low-cost airline in January 2015, is bullish on AAX’s performance in FY2018 as it takes over the medium-haul routes — those above four hours’ flying time — from sister carrier AirAsia Bhd.

This is aided by an exchange rate that has turned favourable for the airline, although fuel prices have increased. Benyamin says AAX has hedged about 24% of its fuel consumption for FY2018.

“We are already pretty lean. The most important thing is that we have increased our (aircraft) utilisation from 14 hours a day two years ago to 17 hours a day, which is pretty much optimum,” he says.

He adds that travel bookings so far in 1QFY2018 appear solid.

Transfer of routes a win-win for both airlines

The transfer of medium-haul routes from AirAsia is seen as a much-needed shot in the arm for AAX as it will add new destinations and further increase its aircraft utilisation.

“With these changes, we can expect higher aircraft utilisation, which equals revenue,” Benyamin says, adding that the move will not involve a switch of aircraft types between AAX and AirAsia.

At the same time, it will ease AirAsia’s problems with slot constraints at congested airports such as in Changsha, China.

“While AirAsia wants to grow its operations in China, it is very tough as major airports there are scaling back in terms of slot capacity due to OTP (on-time performance). So, the only way we can grow there and get more passenger revenue is to mount bigger aircraft, hence, the direct swap (of routes between AirAsia and AAX).

“AirAsia can then divert its capacity from these routes to short-haul flights (that are up to three hours or so) and build scale to compete with its competitors,” he says.

Benyamin assures investors that the transfer of routes does not come at the expense of AirAsia’s growth prospects.

“It has to be a fair trade-off. We will not be sacrificing AirAsia’s revenue. In fact, AirAsia sees it as an opportunity to focus on more profitable routes such as Penang and Kota Kinabalu, where it currently does not have the capacity to add to the frequency,” he says.

Apart from Changsha, AAX will also take over Maldives and potentially Hong Kong and Singapore.

“The focus now is to win market share. Rather than focus on flights around four hours — which could be neither here nor there, while it may not be able to increase the frequency anyway because there are no slots — AirAsia might as well give the routes to us and we operate them on a larger scale,” says Benyamin.

He expects the transfer of routes to take up to six months, as it requires regulatory approvals and passengers to be informed. “We have done it before. It took us four to six months when we took over Chongqing from AirAsia.”

Benyamin also says AAX will add three 12-year-old A330s to its fleet this year. With an all-economy configuration, the aircraft will be deployed on flights with low business class demand such as China or markets with high labour traffic like Nepal.

“We are still negotiating (to buy more aircraft). We are most likely looking at about two to three aircraft a year,” he adds.

Benyamin believes the low-cost, long-haul model continues to make commercial sense as long as the airline has a sufficient network to feed passengers on to its medium and long-haul sectors.

“The mindset has changed. I think they (analysts) need to spend a bit more time to see how other (low-cost, long-haul) airlines are operating. For example, Scoot is doing very well, which justifies that the low-cost, long haul model works. Norwegian Air Shuttle ASA is another example of a low-cost carrier that is growing fast, flying from London to Singapore and New York.

“AAX works well because we have Air-Asia. So, we get the domestic passengers and those coming in from China and Australia. However, if you are an individual long-haul airline with no feeder traffic, it is tough unless you are in a market with a big population,” he says.

“Our key markets are Australia, China, Japan, South Korea, Hawaii and the Umrah market. Once a market is mature and we are doing well, then we focus on other new markets. The problem with AAX previously was that we flew everywhere. Our focus was neither here nor there.

“If we have the right aircraft and distance, maybe we will be in Los Angeles or San Francisco soon, but that will be out of Japan. That is something that we are looking at,” he adds.

For AAX, another immediate task at hand is to find airports that are “cooperative”, according to Benyamin.

“Some of the airports we operate from are very cooperative, giving us support in terms of incentives such as reduced landing fees, but there are airports that we know of here where it is very hard to get things done.

“For example, we are facing a lot of issues at klia2,” says Benyamin, citing the recent fuel leaks on two of the aircraft parking bays at the terminal. “This has caused operational delays and hinders our growth due to runway closures and ongoing repairs on the tarmac.

“The key challenge is to make sure that we work together with airports who are pro-airlines. They should not live only for their bottom line and think about how many McDonald’s or Starbucks will open at the airports, rather, it is about bringing passengers to eat at the McDonald’s and Starbucks,” he adds, indirectly referring to the AirAsia group’s long-standing dissatisfaction with Malaysia Airports Holdings Bhd, which manages 39 airports in the country, except Senai International Airport.

“We are trying to get them to understand that AirAsia Group accounts for 98% of the operations at klia2. They need to realise that we are their main customer, but till today we feel that we are not treated as such.”