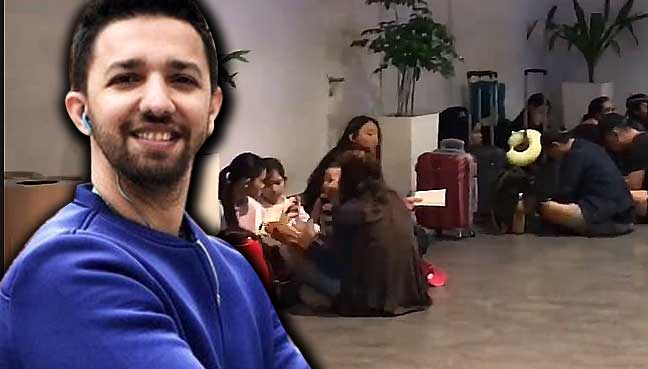 In a series of postings on social media today, AirAsia’s head of communications Aziz Laikar showed that the standard of facilities at klia2 is nowhere near that of KLIA.

Aziz posted videos on his Facebook and Twitter page showing passengers sitting on the floor at klia2 due to lack of seats.

He also posted another video which showed the travellator was out of order.

“And when you get to the gate, there are not enough seats. I see parents trying to calm their exhausted kids and sit on the floor. This won’t happen at KLIA! So, why do you need to pay the same airport tax as KLIA?” he said in his post.

When contacted, Aziz said what he posted was a “regular sight” at klia2.

“This happened in the morning. That is the situation at klia2. It’s a regular sight.

“There were clearly not enough seats,” he told FMT.

Malaysia Airports Holdings Bhd (MAHB) was reported as saying that klia2, which was built by the government to replace the former Low-Cost Carrier Terminal (LCCT), was not a low-cost carrier airport terminal.

MAHB had supported the Malaysian Aviation Commission’s (Mavcom) decision that from Jan 1, the passenger service charges (PSC) rate for all international destinations from any Malaysian airport, including klia2, will be RM73.

Currently, the PSC rate applicable at non-Asean international destinations from klia2 is RM50.

Mavcom said the PSC between klia2 and KLIA should be the same as the two airports provided a similar quality of service.

This was met by stinging criticism by AirAsia Group chief executive officer Tony Fernandes and Petaling Jaya Utara MP Tony Pua who took MAHB and Mavcom to task over the PSC hike.

Fernandes said Malaysia needed a low-cost airport with a different PSC to allow everyone to have a chance to fly.

Pua, meanwhile, said passengers had to walk for a long distance to get to their gates at klia2.