The Airports Quality of Service framework should be in place before the Malaysian Aviation Commission (Mavcom) imposes a levy on air travellers, said AirAsia group CEO Tan Sri Tony Fernandes. 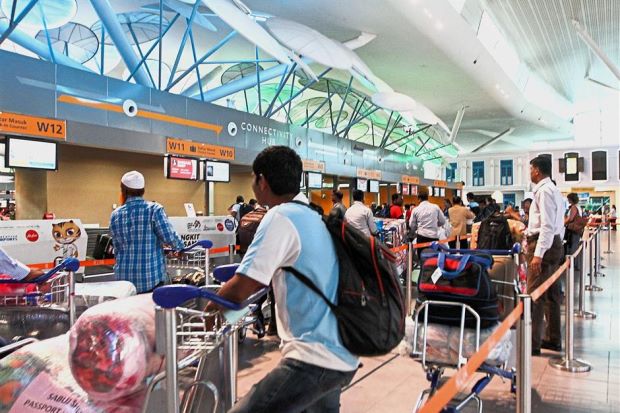 Easing it up: Long queues such as this at the klia2 check-in counter will be a thing of the past if Mavcom gets it right.

The framework developed by Mavcom is aimed at penalising airports that fail to ensure seamless services for travellers, and will be rolled out in stages, starting from the third quarter of next year with the Kuala Lumpur International Airport (KLIA) and klia2.

Fernandes expressed disappointment that the framework took this long to be drawn up.

“Mavcom has been in operation for two years and by the time this comes out, it will be three years.

Fernandes was referring to the revised passenger service charge for klia2 travellers going beyond Asean, which from January will be on par with KLIA at RM73.

Also, with effect from January, all passengers leaving Malaysia by air will have to pay a levy of up to RM1 to cover Mavcom’s operational costs since the Government will stop funding the commission after this year.

“Mavcom must serve the people, not just Malaysian airports. Why not do the work and then decide on the charges?” Fernandes said.

In a statement, Malaysia Airports Holdings Berhad (MAHB), which operators most of the major airports in the country, said it had held discussions with Mavcom on quality of services since July.

“We support and welcome this initiative to ensure the smooth delivery of service at our airports, as our focus has always been on enhancing the customer experience.

“We are looking at the critical services and finalising the service levels and measurement processes, as some of these also involve other stakeholders such as airlines, ground handlers and Immigration,” it said.

MAHB said it was open to transparent service levels where the parties involved were accountable and liable for their areas of responsibility. “We take the matter of service quality seriously, and will respond to our passengers and customers effectively to resolve any issues raised.

“From the Consumer Report published by Mavcom for the March to August period, airports registered the fewest complaints, with only four out of the total 677 received by the commission,” it added.