Malaysia this week opens what it calls the world's largest airport built specifically for low-cost airlines, a project driven by budget travel's phenomenal growth but which debuts under the shadow of missing flight MH370. 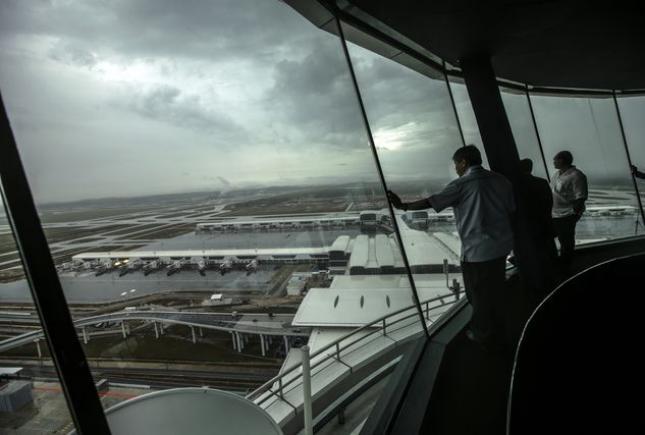 A view of klia2 from the air traffic control tower of KLIA on 24 April. The new low-cost carrier terminal is expected to handle around 25,000 passengers daily.

The USD$1.2 billion facility near the main Kuala Lumpur International Airport (KLIA) was originally targeted to open three years ago but has been hit by repeated delays, amid concerns over safety and subpar construction, even as costs have doubled.

But the new klia2 budget terminal will begin operations Friday, 2 May 2014, with an initial 56 flights, increasing the load as airlines move full operations over from a nearby existing facility (LCCT) in coming days.

Analysts and the travelling public agree the opening of a new budget terminal is long overdue.

The current low-cost terminal is a cramped and bare-bones facility that resembles a bus station. Capacity is 15 million passengers, but about 22 million squeezed through last year.

The gleaming klia2 meanwhile covers an area equal to 24 football fields, authorities said, about four times the size of the facility it is replacing.

Regional low-cost leader AirAsia plans to join them by May 9, when the old terminal is due to close.

About 24 million passengers are expected to pass through klia2 in the first 12 months, and annual capacity is 45 million. Current capacity at the main KLIA terminal is roughly 40 million, but expansion plans are in the works.

Kuala Lumpur has been at the core of a regional budget-travel boom credited in large part to Malaysia-based AirAsia.

The once-failing airline was acquired in 2001 by outspoken Malaysian entrepreneur Tony Fernandes.

He quickly turned it into one of the aviation industry's biggest success stories, its rapid regional growth helping to broaden a market that has benefitted a host of Asian competitors.

"AirAsia is the driving force behind this growth because of its size and its ability to attract travellers with its price-sensitive tickets," said Shukor Yusof, an aviation analyst with Malaysia-based Endau Analytics.

"klia2 will serve as a catalyst to propel air travel in Asia, which is experiencing robust growth."

But the still-unexplained March 8 disappearance of Malaysia Airlines flight MH370, which took off from the main KLIA, has raised worldwide concern over Malaysian aviation and focused attention on klia2's problems.

Its delays and rising costs triggered an ongoing inquiry by a parliamentary committee and accusations last month by impatient AirAsia officials of "many concerns, especially on functionality, safety and security."

These included depressions on runways and taxiways, said the airline, which threatened not to move in. MAHB has acknowledged klia2 is on unstable ground that will require years of upkeep.

Malaysia's government is accused of presiding over a crony capitalist system often blamed for frequent problems and unexplained cost overruns in big projects.

But AirAsia agreed in mid-April it would move over to klia2 after the government said the International Civil Aviation Organisation (ICAO) would inspect the facility.

"I would like to confirm that klia2 is safe," Transport Minister Hishammuddin Hussein told reporters last week.

Shukor said the Asian budget-travel segment had roughly tripled over the past decade to about 50-70 million passengers in 2013, or about 20 percent of regional air traffic.

The expanding Asian middle class means the market can expect further "robust growth of up to 10 percent annually, especially with the launch of klia2."

Pushing a baggage trolley, Agnes Tay, 33, a financial manager for Adidas who was among volunteers in a recent klia2 trial run, called the terminal "a breath of fresh air."

"It is clean and I feel safe. It will make me fly more often," Tay said.

Malaysia hopes klia2 will help increase and broaden the flow of tourists to the country. Nearly 26 million came in 2013, the vast majority driving over from neighbouring Singapore.

MH370 has cast a cloud over hopes of increasing fast-growing arrivals from China, Malaysia's third-largest source of tourists.

Two-thirds of the 239 people on MH370 were from China and tens of thousands of Chinese have cancelled plans to visit.

But analysts said long-term effects are not expected.