It has all the sophisticated goodies required for a modern-day mega airport: the capacity to handle 45 million passengers a year, the world’s tallest control tower and a sizeable dedicated shopping mall, to name a few. 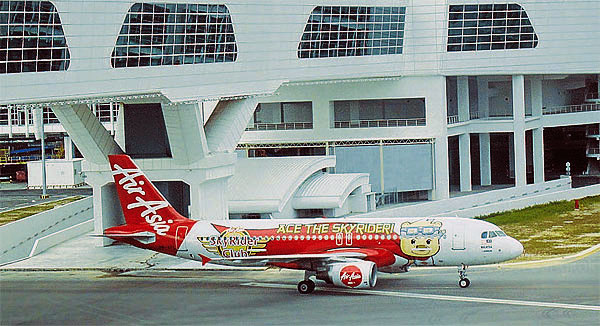 An AirAsia A320 taxis past klia2‘s unique skybridge

While many passing through Kuala Lumpur International Airport 2 (klia2), which started commercial operations on May 2, may enjoy the aesthetic qualities of what has been dubbed Malaysia’s next-generation hub, the airline that puts more than 90% of air traffic through it is visibly unhappy.

AirAsia, the continent’s largest no-frills carrier (based in Malaysia, with sister airlines in Thailand and elsewhere), is up in arms about what it sees as excessive airport levies and a prohibition on using its own technology — irritants that the airline blames for undermining its low-cost carrier (LCC) model.

In particular, AirAsia frowns upon being forced to use the jet bridges, a standard feature for transferring passengers from the terminal to the aircraft’s cabin and vice versa, as this incurs an 85-ringgit (867-baht) charge per use.

AirAsia is also forbidden to use its own self-service check-in kiosks, instead relying on a common-use self-service system with limited functionality that is provided across the board by klia2.

Furthermore, AirAsia has not been allowed to use a system linked to an Interpol database to check whether passengers have fraudulent passports.

“There are things we pay for here that we don’t necessarily need and that increase our cost base,” said Steven Dickson, head of ground and in-flight operations at AirAsia Bhd.

As a no-frills carrier, he said, AirAsia tries to offer the lowest fares in the market, “and to be able to do that we need to get the lowest costs”.

AirAsia’s operating costs at klia2 have increased by roughly 10% when compared with the airline’s previous hub, the Low-Cost Carrier Terminal (LCCT), situated a distance away from klia2 but lying in the same general area. It was closed at the beginning of May.

“The actual cost of using the jet bridge is only 25 [Malaysian] cents per passenger,” said klia2 senior manager for operations Raghbir Singh Bhall. “Do you want your passengers to get wet [from walking on the tarmac while boarding and disembarking] when it rains?”

AirAsia does not absorb these charges, but instead passes them on to passengers in the form of a “klia2 fee”, amounting to three ringgit per ticket since May 9, when it commenced operations from the 4-billion-ringgit airport.

Malaysia Airports Holdings Bhd (MAHB), the state-controlled operator of airports in Malaysia, has said the klia2 fee was imposed unilaterally by the airline itself on this matter.

Mr Dickson said the klia2 restrictions, especially the ban on deploying AirAsia’s own technology developed over a decade of its existence, are unique among the carrier’s bases in the region.

The fact that AirAsia’s airlines put over 30,000 passengers a day and growing through klia2 has so far not provided leverage in talks with MAHB.

Mr Dickson said AirAsia is still working with MAHB to find solutions to the constraints. Asked whether AirAsia would prefer to operate in the cramped and bare-bones facility that resembled a bus station at the LCCT if given a choice, the executive made AirAsia’s position clear.

“We don’t want a grand facility. We want a simple but efficient terminal with safe operations that delivers the costs and convenience which our customers want. We want klia2 to work.”

Contrary to the general perception, klia2, with the functionality and amenities of a world-class airport, is not a low-cost facility per se, but one that is serving budget airline traffic.

One of the prime objectives for building klia2 was to cater to the explosive growth in low-cost travel through Kuala Lumpur that pushed the LCCT well beyond its capacity.

But Mr Raghbir stressed: “Please don’t get it wrong, this is a terminal for passengers to enjoy themselves.”

A number of unnamed full-service airlines also have expressed interest in operating through klia2, according to Mr Raghbir.

klia2 is about the size of Thailand’s gateway airport, Suvarnabhumi, and shares some common structural issues such as a long walk from check-in to the boarding gate. Walking-time advice signs were put up.

It is the first airport in Asia and the third in the world with a skybridge, spanning 300 m, to connect the passenger terminal to the satellite building.

A full-length, 4,000-m runway was also built, bringing the total number of runways in operation at the international airport complex in Sepang to three.

klia2 was originally meant to open three years ago, but construction delays and safety issues pushed back the opening to May 2.

The new airport is expected to handle 23-24 million passengers this year, compared with about 22 million processed last year through the LCCT, though it was designed for passenger traffic of only 15 million.

Mr Raghbir said klia2 takes up one-third of the land available for it, leaving room for expansion.