Wearing the iconic red cap with a casual white-collar shirt and jeans, AirAsia co-founder and non-independent executive chairman Datuk Kamarudin Meranun talked about his responsibility during an interview with Sin Chew Daily. 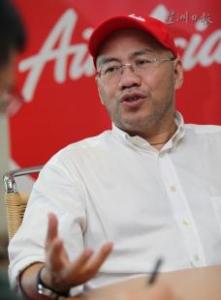 Kamarudin: My main task is to coordinate with the government and convey the right messages to the people.

Kamarudin said that the reason prompting him, who usually maintains a low profile, to have a series of interviews with the media is, the wish to tell the government and outsiders that AirAsia is an Malaysian airline.

"We have been misunderstood by the government and the people recently and this is very bad for us. One of my main tasks is to take the lead in engaging with the government while conveying the right messages to the people," he said.

He said that the AirAsia Asean headquarters office in Jakarta has completed its tasks and most regional offices will be integrated into the Malaysia AirAsia to be based at the Kuala Lumpur International Airport 2 (klia2), which is expected to be completed next year.

Although he looked tired after undergoing a few interviews with the media, Kamarudin still friendly said that the AirAsia Asean headquarters was not meant to "run away", but to establish a cooperative relation with the Asean Secretariat.

"We have business associations with various Asean corporations and the AirAsia Asean headquarters is an important integration platform. We will focus back on AirAsia after it has completed its tasks," he said.

To implement the important layout of Asean community, AirAsia established the AirAsia Asean headquarters in Indonesia two years ago, sparkling rumours about it getting ready to run away. Later, the klia2 also led to a series of tit for tat between AirAsia and the Malaysia Airports Holdings Berhad (MAHB).

It was reported that the completion of klia2 scheduled in two years was delayed for five times and later, it also changed from a low-cost air terminal into a mix air terminal. The cost of the project also soared from the original RM1.9 billion to RM4 billion. The MAHB said that AirAsia requested the installation of a fully-automated baggage handling system (BHS) and wanted to raise the passenger capacity from 30 million per annum to 45 million passengers. However, AirAsia denied all the accusations.

Kamarudin said tactfully that some people said that AirAsia has asked too much but it has always been confused with the wish of pursuing perfection which is resulted from enthusiasm.

"It is actually difficult to define them. If we are enthusiastic (over something), we will naturally try to persuade others. Although they said that we have asked too much, it is actually not unless if you can convince us with good reasons. This is a situation of whether I agree with you or you agree with me.

"My goal is to re-establish contacts with the government and various units. Whether it is going to be successful or not, I don’t know. But I will try to do the best. We are a Malaysian airline. We are standing here proudly and we are well-disciplined," he said.

Kamarudin also mentioned that AirAsia was even accused by Deputy Transport Minister Datuk Abdul Aziz Kaprawi and he believed that it was caused by misunderstanding.

He pointed out that in addition to communicating with the government and educating the people, his tasks also include streamlining operation through integration and cutting operating costs.

When being asked to comment on cost hikes due to the government’s move to cut petrol subsidies, he said it was difficult to control and the point lies on how to streamline operational procedures to avoid duplication.

"Fuel cost hikes could be avoided only through fuel hedging but even when the global oil prices drop, we might still face losses," he said.

He said that currently, Malaysia AirAsia is fully responsible for domestic operation and how to integrate the operations of regional offices is the key deciding the future of AirAsia.

"For example, Malaysia AirAsia is responsible for the operation which is also under the responsible of the Jakarta base and such kind of duplication must be streamlined. Meanwhile, cost controlling is divided into two categories, namely fuel and non-fuel costs. Non-fuel cost will bring far reaching impacts and the complexity of our current operation is unimaginable," he said.

When being asked about the future of AirAsia, he said that klia2 will undoubtedly be the operational headquarters of AirAsia.

In addition, Kamarudin hopes to have international flight transfer stations outside Kuala Lumpur so that passengers from other states will not have to rush to Kuala Lumpur to catch their flights.

"For instance, why must passengers from Kota Bharu and Johor come to Kuala Lumpur to catch their flights? This is also an important task for me to communicate with the government," he said.

He said that AirAsia is having ongoing expansion and currently, it has about 145 planes and is continuously purchasing more.

"The biggest challenge of AirAsia is how to maintain its cost and it is our worst nightmare. Tiger Airways has failed to survive and it is believed that Jet Star’s market share is also shrinking. It is not an easy task to survive and expand while providing low-cost air tickets," he added.