Malaysia Airports Holdings Bhd (MAHB) has expressed concern over the slippage in the work schedule of the klia2 terminal building, which is being built by the UEMC Binapuri joint venture.

MAHB said yesterday that the terminal building contractor had to make “every endeavour” to complete it for the May 2, 2014 opening of the klia2.

It said the terminal building was scheduled to be completed together with the certificate of completion and compliance by end of January 2014.

This was to enable operational readiness and airport transfer to start three months before the May 2 opening date, it added.

As for the other facilities at klia2, MAHB said the apron, third runway and taxi-way, and other infrastructure facilities had been completed.

The remaining works of aeronautical ground lighting and air traffic control systems were progressing on schedule.

MAHB said the special task force headed by the Deputy Transport Minister was also aware of these concerns and that it was monitoring the construction diligently. 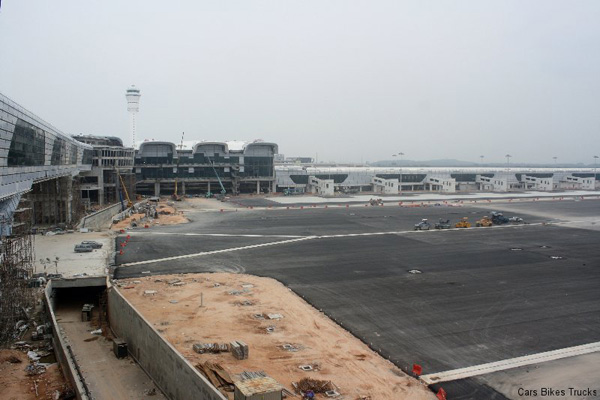 klia2 to miss May 2 deadline?

KUALA LUMPUR: The controversial RM4 billion klia2, which is slated for a May 2, 2014, opening, may not meet its completion deadline due to construction issues at the main areas of the airport, sources familiar with the matter said.

Malaysia Airports Holdings Bhd (MAHB) officials did not reply to The Edge Financial Daily’s queries regarding the matter as at press time yesterday.

Although officially most parts of the terminal are about 90% complete, klia2, which will be Malaysa’s first hybrid airport, still needs to undergo the operational readiness and airport transfer (ORAT) process for at least three months after the contractors have handed it over to MAHB.

The ORAT will put klia2’s infrastructure to test to ensure it is ready for commercial use.

Should this cause a delay in the opening of klia2, it will be the fourth postponement.

The airport was initially scheduled for opening on June 28 this year to commemorate the 15th anniversary of its sister airport Kuala Lumpur International Airport (KLIA).

MAHB has come under fire for not completing the project on time but it blamed AirAsia Bhd, government agencies and the main contractor for the delays.

The delays were mainly attributed to changes in the design and scope of work at the airport, which was initially designed to cater to a passenger volume of 30 million but later upscaled to 45 million.

Then in June this year, UEM Construction Sdn Bhd, one of the joint-venture (JV) partners of the consortium involved in the construction of the main terminal building, requested an extension of time to complete the project.

UEMC-Bina Puri JV, which was awarded the RM997.23 million contract to construct the main terminal and satellite buildings of klia2, said it could only hand over the project to MAHB on April 30, 2014, 10 months after the original June deadline. MAHB then slapped a RM6 million liquidated and ascertained damages (LAD) a month, or RM199,455 per day, on UEMC-Bina Puri for failing to meet the completion deadline.

The klia2 project was first announced in March 2009 with its initial cost being RM2 billion. But in 2011, the figure ballooned to just under RM4 billion after MAHB announced various changes and upgrades to the original plan.

The increase in costs was mainly attributed to additional earthworks, which required another RM670 million.

About RM420 million was allocated to the construction of a larger terminal building while another RM160 million was utilised for extra aircraft stands.

After klia2’s design was upgraded, its air traffic control tower facilities required another RM130 million while public infrastructure needed an extra RM260 million. The aerobridges, which were not included in the original plan, cost RM120 million.