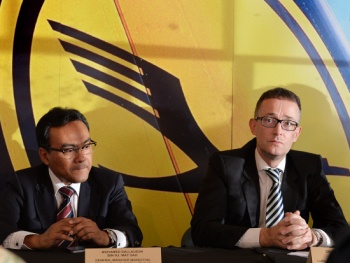 "We will promote the facilities at both the Kuala Lumpur International Airport (KLIA) and klia2 (in Sepang), but it is up to the airlines where they want to operate from," he told reporters after a Lufthansa media briefing yesterday.

He said the new airlines will be a mix of full service and low-cost carriers (LCCs).

"In terms of klia2, most of the (existing) LCCs have expressed interest to move to the new terminal by next year. As for new LCCs, there may be one or two that we are talking to but looking at the trend, most LCCs will move to the new terminal," he said, adding that klia2 is likely to start operations with at least 10 airlines next year, including AirAsia Bhd.

"It’s been dedicated for low-cost airlines but we don’t stop any other premier or full service carriers operating from that terminal. The services and facilities at klia2 will be as good as what we offer at the main terminal," he said.

On the passenger service charge (PSC) at klia2, he said the government has not made any announcements on the rate yet.

"All airport charges, except for PSC, are the same for both KLIA and klia2," he added.

Meanwhile, Sallauddin said MAHB is still in talks with British Airways and Qantas for them to resume flights to Kuala Lumpur.

He added that British Airways is keen to return but will only decide in two to three years, while Qantas is currently prioritising its partnership with Emirates.

"We’re in discussions with British Airways and Qantas, but we’re also talking to other airlines?We will continue and will always talk to airlines regularly and continuously so that they will not lose sight of Kuala Lumpur," he said.

"For the current flights via Bangkok we have close to 90% load factor and there is no doubt that we will fill the aircraft for the new direct flights. It’s about finding the right balance," he said, adding that the direct flights will also be filled by passengers from other parts of the region travelling to Europe via Malaysia.

The new direct flights will be linked to the Lufthansa hub in Frankfurt five times a week compared with the current four times weekly flight via Bangkok. The new flights will operate with Airbus A340-600.

Lufthansa currently flies to Kuala Lumpur, Bangkok and Singapore in the region and it plans to extend the Kuala Lumpur flight to Jakarta.