Skip to content
The Malaysian family returns home for Hari Raya on April 30 and May 1 (and May 7, May 8) can enjoy toll-free travel or discounts of up to 50% on local highways for all vehicles, read the news.

The North-South Expressway (NSE), or PLUS Expressway, is the longest controlled-access expressway in Malaysia with the total length of about 772 km running from Bukit Kayu Hitam in Kedah near the Malaysian-Thai border to Johor Bahru at the southern portion of Peninsular Malaysia and to Singapore.

The expressway links many major cities and towns in western Peninsular Malaysia, acting as the ‘backbone’ of the west coast of the peninsula.

It is also known as PLUS Expressway, named after the highway’s concessionaire, Projek Lebuhraya Utara Selatan Berhad.

The PLUS Expressway passes through 7 states on the peninsula: Johor, Melaka (Malacca), Negeri Sembilan, Selangor, Perak, Penang and Kedah.

The PLUS Expressway provides a faster alternative to the old Federal Route 1, thus reducing travelling time between various towns and cities.

It is part of the Asian Highway Network of route AH2. 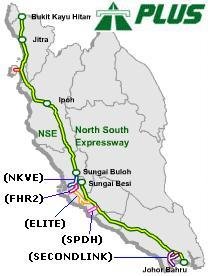 The North-South Expressway is divided into 2 main routes:

Both routes run in parallel with the Federal Route 1 from Johor Bahru to Bukit Kayu Hitam (except the Simpang Ampat – Yong Peng section to provide an access to Malacca City), where both terminus of the FT1 (Johor Bahru and Bukit Kayu Hitam) serve as the Kilometre Zero of the E2 and E1 respectively, while Kuala Lumpur serves as the Final Kilometre for both routes.

While the E2 ends exactly at the Selangor-Kuala Lumpur border at KM310, the E1 ends at Exit 108 Bukit Lanjan Interchange at KM460 before proceeding to the city via the New Klang Valley Expressway (NKVE), which is also gazetted as Expressway E1.

The E1 and E2 expressways are linked together via the North-South Expressway Central Link (ELITE).

Constructed in phases over a period of seven years, the North-South Expressway was officially opened on September 8 1994, signaling the coming of age of Malaysia’s road transportation system.

It is part of highway 2 of the Asian Highway Network, is a mostly tolled, interstate controlled-access highway in Peninsular Malaysia.

The E1 expressway forms the north section of the larger North-South Expressway, passing through the northwestern states of Kedah, Penang, Perak and Selangor.

The expressway begins at the Bukit Kayu Hitam checkpoint in Kedah where the Malaysia-Thailand border lies, and ends at Bukit Lanjan in Selangor where the expressway interchanges with the New Klang Valley Expressway (NKVE).

It is the southern part of the North-South Expressway, is one of the longest expressways in Malaysia.

The North-South Expressway Southern Route begins in the southern part of Kuala Lumpur, at Sungai Besi.

Its southern terminus (Kilometre Zero) is at Pandan, Johor Bahru.

The North-South Expressway is a toll expressway with two toll systems:

1 Open system – Users only have to pay at certain toll plazas within the open system range for a fixed amount.

“Open system” is used in the following stretches of the North-South Expressway:

SecondLink
Seremban-Port Dickson Highway
Butterworth-Kulim Expressway
2 Closed system – Users collect toll tickets or PLUSTransit cards before entering the expressway at respective toll plazas and pay an amount of toll at the exit toll plaza plus the distance from the plaza to the Limit of Maintenance Responsibility (LMR).