★ Review the klia2 layout plan to learn how to get around the klia2 terminal.

The following is the flight schedule status for AirAsia Zest (Z2) flights at the klia2.

Zest Airways, Inc., operating as AirAsia Zest, is an airline based at the Ninoy Aquino International Airport in Pasay City, Metro Manila in the Philippines.

Q. How can I be sure that the booking on airasia.com for a AirAsia Zest flight is legitimate?
All bookings for AirAsia Zest flights via www.airasia.com starting May 10, 2013 are considered valid and confirmed once you receive an e-ticket indicating your flight details and payment confirmation.

Q. Where does AirAsia Zest fly to?
AirAsia Zest flies to 9 domestic and 3 international destinations from NAIA Terminals 3 & 4 in Manila.

Q. What is the difference of terms and conditions between AirAsia and AirAsia Zest?
AirAsia Zest carries the same The Terms and Conditions of Carriage as that of AirAsia for bookings made on 3 May 2013 onwards.

Q. What terminal does AirAsia Zest fly to?
Please proceed to AirAsia Zest counters at the following terminals:

Q. What is the difference between a flight operated by AirAsia and by AirAsia Zest?
Crew
Both AirAsia crew and AirAsia Zest crew are competent and highly trained to provide safe, efficient and best service possible.

Service
Both AirAsia and AirAsia Zest are committed in providing high quality service to its respective passengers.

In-flight experience – Meals (i.e. do you serve meals on board? Is it the same as AirAsia flights?)
Meals are served on board AirAsia Zest flight. In the near future, AirAsia Zest will carry the same menu as those provided on AirAsia flights. For now, you are not able to pre-book your meals online for Z2 flights.

Baggage (i.e. what is the baggage allowance allowed?)
For travel dates from 10 May 2013 onwards, both AirAsia and AirAsia Zest allow 7kg carry-on and pre-booking of check-in baggage from 15kg up.

Seats
AirAsia Zest allows you to select/ reserve your seat only in the first row of the aircraft. 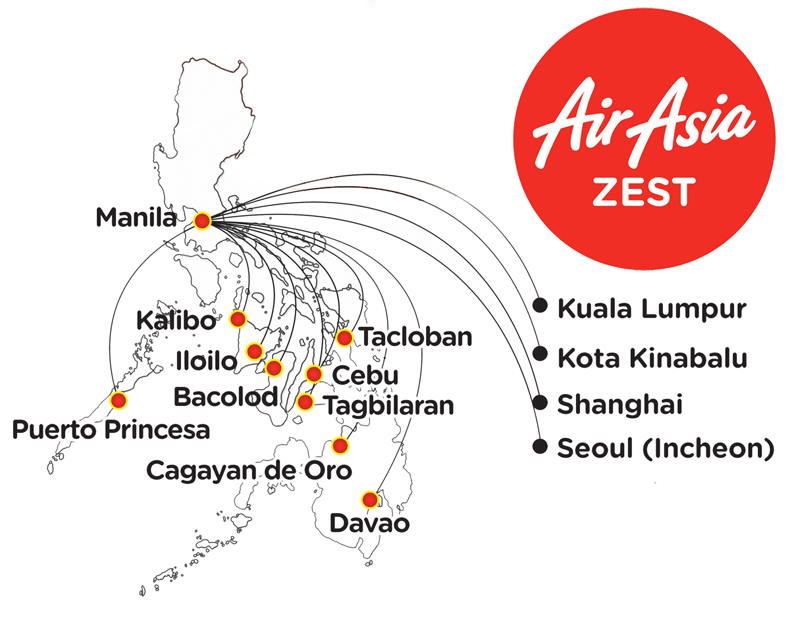 The following is the layout plan of the klia2 terminal.

Click on any of the following to view more information.