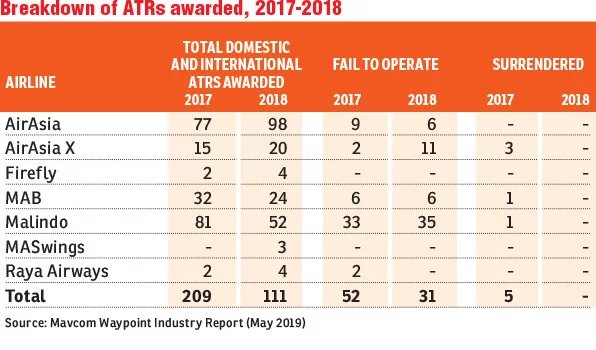 This is despite it announcing last Tuesday that it would remove the processing fee from October.

In June, it was reported that the aviation regulator had issued several show-cause letters to airlines that had failed to comply with the new code. Mavcom did not reveal the identity of the airlines.

However, it told The Edge Financial Daily that it will issue show-cause letter to airlines on violation of the MACPC, requesting for the reply to be in writing.

“The commission will then determine whether the airline has contravened the said provision of the MACPC. Prior to determining the quantum of the financial penalty, the airlines shall be accorded with the opportunity to provide mitigating factors within 14 days,” it said in an email response.

The commission said nevertheless, the decision on whether it will impose penalty on such violation will be dependent upon the findings of the evaluation of the alleged contravention.

“It is compulsory [for airlines to remove processing fee]. As stated in the MACPC, airlines must disclose the final price of airfare both at the point of advertisement and prior to the consumer purchasing the flight tickets.

“The final price must include the base fare and all charges to be paid to the airline, government-imposed taxes and fees, fees and charges prescribed under any written law, as well as fuel surcharge. This in effect eliminates hidden charges, such as card payment charges and administrative fees,” Mavcom added.

Mavcom went on to say that the enhancement to the MACPC was done to ensure that consumers are made aware of the final price of the ticket at the point of selecting the preferred option.

“It has been airlines’ practice in the past where the price increases after selections are made due to additional charges which were not disclosed from the outset,” the regulator said.

As such, it may seem that AirAsia and AAX would be liable for contravening the MACPC as they will still be charging a processing fee on passengers until Sept 30.

Currently, AirAsia and AAX passengers have to pay a processing fee of RM4 for debit cards and as much as RM16 for paying with UnionPay. However, if a passenger opts to make payment using AirAsia’s e-wallet application BigPay, there is no processing fee involved.

In January, AirAsia also had to stop charging a RM3 fee on its passengers departing from klia2, after Mavcom made it illegal for airlines and airport operators to impose unnecessary charges on passengers under the enhanced consumer protection code. The fee was introduced on May 9, 2014, when the carrier moved its operations to klia2 from the former low-cost carrier terminal in Sepang. AirAsia had said the charge was imposed to offset the group’s cost of being compelled to use the terminal’s facilities such as aerobridges and the SITA check-in/boarding systems.

Based on Malaysia Airports Holdings Bhd’s (MAHB) annual report for 2018, AirAsia Group carried 30.16 million domestic and international passengers at klia2. Assuming half of them were departing passengers, a back-of-the-envelope calculation indicates that RM45.24 million was collected by AirAsia from the RM3 klia2 fee alone.

AirAsia did not disclose the amount it had collected through the processing fee or the RM3 klia2 fee in its 2018 annual report.

When contacted, AirAsia declined to comment except to say that it will make an announcement in due course on the matter.

Thus, while some consumers have attributed the removal of the RM3 klia2 fee and processing fee to AirAsia’s effort to keep fares low as the latter had also recently launched a #FairAirportTax social media campaign, it is actually to comply with the enhancement to the consumer protection code.

The #FairAirportTax campaign is to protest against the government’s move to equalise the passenger service charge (PSC) for non-Asean international flights at klia2 with that of the main Kuala Lumpur International Airport.

On AirAsia group chief executive officer Tan Sri Tony Fernandes’ allegations that Mavcom has not been looking after passengers’ interests as claimed by it and that the commission has also been slowing down the airline’s growth by “taking forever” to approve new routes, Mavcom said: “We are supportive of all players in the industry and acknowledge that AirAsia Group is the largest airline in the country.”

On the alleged refusal by Mavcom to step in in the dispute between AirAsia Group and MAHB over outstanding PSC collection, the commission said that MAHB had elected to bring the claims to the court for determination.

“As such, the commission took the stand that due process must be allowed to run its course so as to avoid multiplicity of proceedings or abuse of process by any party. The Kuala Lumpur High Court had on June 25 concurred with the arguments put forth by the Attorney General’s Chambers, which resulted in the rejection of leave for AirAsia to commence a judicial review proceeding against the commission,” it explained.

“In a separate forum, the high court had also allowed MAHB’s applications for summary judgment against AirAsia as the court found that there were no triable issues,” it added.