About a month ago, a senator, Datuk Hanafi Mamat suggested that the government ought to introduce a guideline that stipulates the need for local airline stewardesses to don a more Shariah-compliant uniform, to ensure that it is in line with Malaysia’s image as a Muslim country. 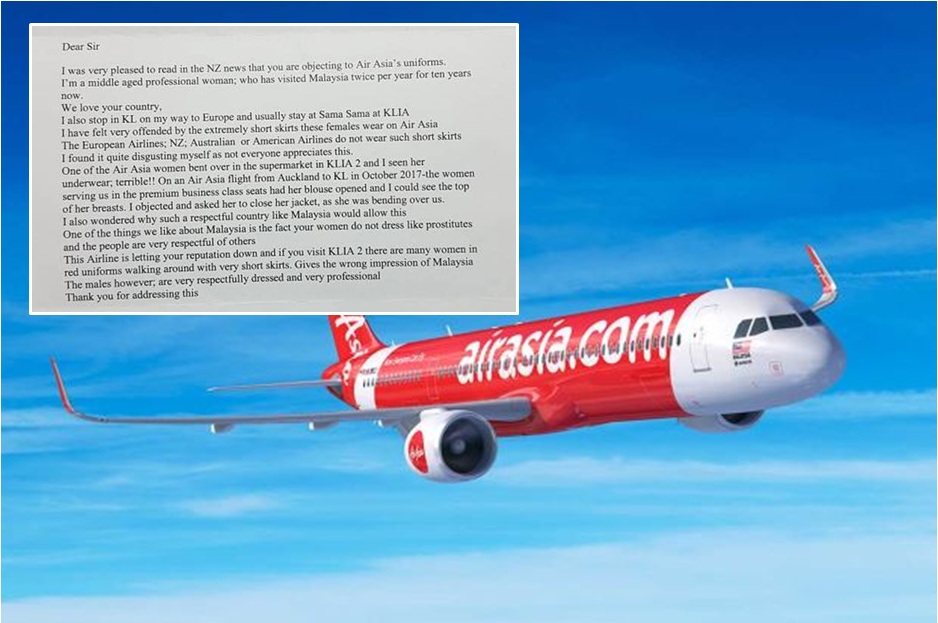 While the proposal had Malaysians talking, Utusan Malaysia reported that the senator had received a letter from a New Zealander, Dr June Robertson – expressing her disgust over AirAsia’s uniform.

As written in the letter, Dr Robertson shared that she has been “visiting Malaysia twice a year for 10 years now”, while pointing out that one of many reasons as to why she loves Malaysia is the fact that the ladies "do not dress like prostitutes" and we respect one another.

“I felt very offended by the extremely short skirts these females wear on AirAsia,” she expressed and added that European, New Zealand, Australian and American airlines’ uniforms are more decent.

“I found it quite disgusting myself as not everyone appreciates this.” 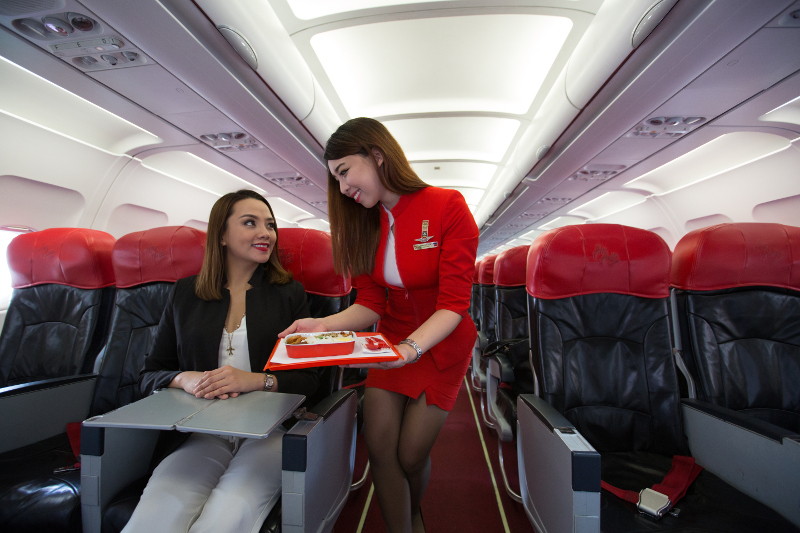 Dr Robertson went on to relay that she had the misfortune of seeing a stewardess’ underwear, after the stewardess bent over in a supermarket located at klia2.

In October 2017 on board a flight from Auckland, New Zealand to Kuala Lumpur, Malaysia, the “middle-aged professional woman” recalled that a stewardess had the top of her blouse opened.

“The air stewardess serving us in the premium business class seats had her blouse opened and I could see the top of her breasts,” she wrote.

“I objected and asked her to close her jacket as she was bending over us.

“I also wonder why such a respectful country like Malaysia would allow this.”

She pointed out that AirAsia is permitting Malaysia’s reputation to go down the drain, due to the fact that the stewardesses are dressed in red revealing uniforms, while the stewards are dressed respectfully and professionally.

After Senator Hanafi made the proposal, New Straits Times reported that Senator Datuk Abdullah Mat Yasim opined that the uniforms worn by AirAsia stewardesses as “too revealing” and could potentially arouse customers.

His two cents were echoed by Senator Datuk Megat Zulkarnain Omardin, who underlined that, “My wife is worried whenever I fly alone on Malindo or AirAsia.

“This is a real hassle for me,” he shared.

However, before the issue concerning the uniforms of air stewardesses were raised, the Group Chief Executive Officer (CEO) of AirAsia, Tan Sri Tony Fernandes, hinted via his Instagram that the low-cost airline will change their uniform to fit Malaysia’s multicultural society.

The photo, which was uploaded on 30 October 2017, was well-received by Malaysians as they believed that the varying uniform will add to the company’s unique selling point (USP).

Malaysian Digest reached out to AirAsia for a few comments, but to no avail.

However under the promise of anonymity, a former cabin crew member of AirAsia relayed that it is unfair to simply scrutinise the woman for the company’s uniform.

“I understand why and how people can deem AirAsia’s uniform as too sexy, but Dr Robertson’s remarks were rude and uncalled for.

“I honestly respect her two cents, but I cannot accept the manner of how she conveyed it as there is always a proper and polite way when speaking our mind,” the 28-year-old stated, whilst questioning the authenticity of the letter.

The woman who currently works with Emirates Airline emphasised that, in current times where people are advocating for women’s rights – especially when people have started to say no to sexual harassment, it has encouraged for people to be more sensitive towards women.

“Six years ago when I worked with the airline, no one was making a fuss over my uniform,” she conveyed, and opined this recent incident can serve as an opportunity for local airline companies to progress with current times.

“I’m grateful that people have started to be more conscious of women’s right, but at the same time, I do believe that there is always a more subtle way in relaying your thoughts.

“And on a personal note, it is really unfair to solely blame the stewardess for men’s inability to lower their gaze.”