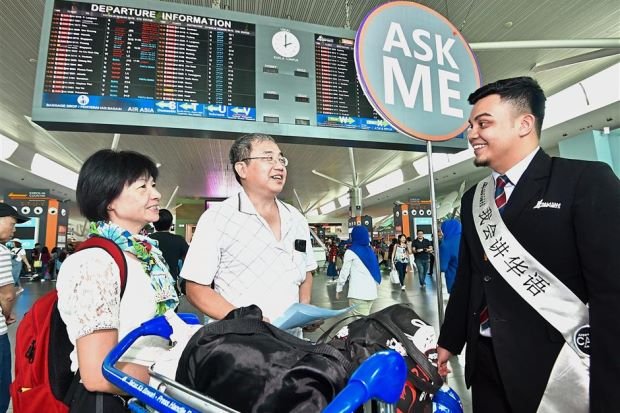 Ready to assist: A MAHB officer attending to enquiries from a couple from Hong Kong at klia2

The daily morning shift starts from 8am to 3pm with the late shift lasting till 10pm, which is the peak hours for arrival flights from China and Hong Kong.

Loke also said MAHB was also communicating with the Han Cultural Centre Malaysia, Inti College and Linton University College to recruit more part-timers to work as such officials in both KLIA and klia2.

MAHB acting group CEO Raja Azmi Raja Nazuddin said besides the Mandarin-speaking personnel, a special guidebook in that language would also be published.

Malaysia and China have set 2020 as the Year of Culture and Tourism between the two countries to promote greater people-to-people contact and sustainable socio-economic growth.

China tourist arrivals in Malaysia is booming with a 10.2% growth rate over the past year.

It was revealed that there were 1.009 million tourists from China to Malaysia from January to April 2018, which was a 37.2% increase compared to the same period last year.