What do you do if you’re a high-ranking government official on a visit to AirAsia’s sprawling RedQ headquarters and chance upon its revered gigantic winding slide? 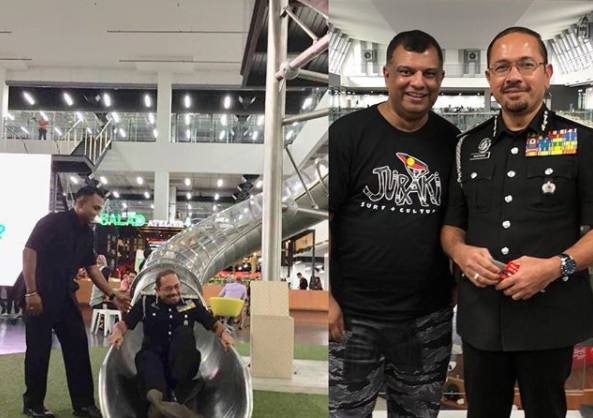 Immigration director-general Datuk Seri Mustafar Ali took a ride on RedQ’s gigantic winding slide while on a visit to the facility.

Well, you get on it, and ride it like a champ, of course.

It doesn’t matter even if you happen to be Malaysia’s director-general of Immigration Datuk Seri Mustafar Ali. You just do it.

On a visit to the 18,000 sq m facility at klia2 on Thursday (March 29), Mustafar, who was dressed in full uniform, said before he gamely climbed into the slide’s chute: “This is no funny business. We must test it out properly”

Seconds later, the slide spat him out at three floors below on solid ground, safe and sound.

AirAsia boss Tony Fernandes posted an Instagram video of the ride with the caption: “We need more Government officials who engage with industry and work with us to make things better and are fun and humble. Well done DG Mustafar Ali.”

The video was watched more than 25,000 times within four hours of being posted.

In a separate Instagram post, Fernandes said that Mustafar had visited the facility to see how to improve customer service at immigration.