JUST two months into his appointment as the new Malaysian Aviation Commission (Mavcom) executive chairman, Dr Nungsari Ahmad Radhi already has a lot on his plate. 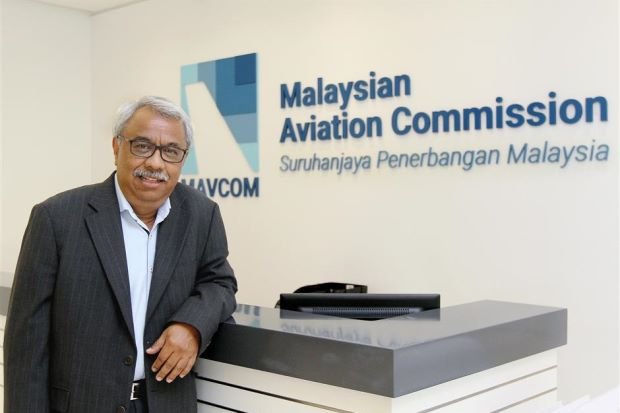 News Desk to do interview with new Executive Chairman of MAVCOM – Dr. Nungsari. It will be his first official interview since his new appointment. Interview will focus on protecting rights of consumers.

But a cause that he holds dear, besides raising the standards of the aviation sector, is protecting consumer rights.

He is no stranger at Mavcom, having served as a commissioner since its inception in 2016.

He served as a one term Balik Pulau MP from 1995 to 1999 and holds a PhD in Economics from Purdue University.

“I’m many things. But essentially, I’m an economist,” he says.

Dr Nungsari speaks to The Star in his maiden interview with the press as Mavcom executive chairman.

Q: What are your aspirations for Mavcom, at least within the first year?

A: As regulators, what we see as key for the aviation industry is regulatory certainty. We have an obligation to ensure that regulations are clearly defined. We are outlining the regulations through our various codes including the Malaysian Aviation Consumer Protection Code 2016 (MACPC), the Quality of Service (QoS) Framework and the Regulated Asset Base (RAB) Framework.

We look to continue doing this and are mindful that to get it right, it will take time and will involve an extensive process that will involve multiple stakeholder engagements.

If the clearly defined standards are not met, we can then move to penalties. So, there is no ambiguity. It’s not about making life difficult, be it for the industry or consumers. It’s about raising standards.

The whole idea is to turn Malaysia into an important regional aviation hub and we can only do that if we are able to make our local aviation sector more attractive to industry players by creating an ecosystem that is conducive for growth.

Over the next year I would like us to continue empowering the industry and protecting the consumers, thereby making the sector more attractive. The sector will not grow and people will not be interested to come and invest if they think the rules of the game are not clear.

Q: What are your thoughts about the consumers’ awareness of their rights?

We are not funded by the government and that was a deliberate decision. We are funded by the passengers through the RM1 Regulatory Services Charge, so we are always mindful of that, and therefore, the consumer welfare dimension of the aviation regulation is actually of paramount interest.

That’s why we’ve made a commitment that if the proceeds of the RM1 exceed the operating cost of the commission, and it should be because we’re very frugal, it will go into a separate fund which goes to consumer education and human capital development.

The awareness of consumer rights is not quite there – Malaysians are too accommodating, not just in aviation. There is a bit of a vacuum there.

You need consumer education to be a good consumer of airlines, know how to shop for and buy tickets, know what your rights are and know how to plan your travel.

I’m quite proud of what the team has achieved on the consumer side of things but we still think that the awareness of consumer rights is not there.

We created a sub-brand – FlySmart – which covers both consumer education and advocacy, a platform to talk to us and also to resolve issues. We thought it’s useful just to have a separate identity to do this with the full force of the law, the Malaysian Aviation Consumer Protection Code 2016 (MACPC). We’re looking to strengthen the code. As we go along, we get more complaints and feedbacks from both airlines and consumers.

Q: How effective has FlySmart been?

We’ve gotten more and more passengers raising their issues with us, which actually gives us a lot of work. But we want that.

We want our jurisdiction to be known as one that offers quality services, so we want people to complain. We hope it will reach a certain plateau. We don’t know yet where the plateau is but the team has done a lot to resolve these issues. Over 99% of the complaints have been resolved.

Q: Transport Minister Anthony Loke has said that Mavcom will review the passenger service charge (PSC). It was fully equalised beginning this year but there were claims that klia2’s international PSC does not seem to be equalised. Can you elaborate?

The PSC has been around for several decades and is not new to the sector. It is a charge on the use of the airports and its services. The PSC is a way of funding the development, not just on the operating expenditure but also the capital expenditure side of the airport.

When Mavcom conducted a thorough review of the PSC, it was to bring Malaysia closer towards applying full international practices for airport charges regulation.

We did a thorough study over two years and conducted a series of engagement with stakeholders. The conclusion was to equalise. With that, we reduced Asean PSC charges. It was RM65, we brought it down to RM35. Effective 1st of January this year, the PSC rate for international destinations beyond Asean nations at klia2 is RM73, the same rate as those at other airports in Malaysia.

These rates remain among the lowest in the world. In fact, the PSC rate of RM73 for long-haul flights is lower than that in the airports of other countries including Thailand, Singapore, Cambodia, Hong Kong, United Arab Emirates, France and the UK.

Moving forward, we’ve discussed with the Transport Ministry that we have to use some basis to calculate the PSC. It cannot be arbitrary, so we’re going to use the Regulated Asset Base (RAB). If the asset goes into performing the regulated service, we will calculate and derive what is the actual cost for the airport to come up with a more objective basis of determining the amount.

We can’t do it for every airport but we can do something like clusters of airports with only domestic flights and those with international flights.

Any decision to collect a lower amount than the PSC rate set by these regulations is considered a purely commercial arrangement between airport operators and airlines. In the case of klia2, it is entirely Malaysia Airport Holding Bhd’s prerogative to maintain or increase the PSC amount collected from passengers, provided the amount is not higher than the maximum rate that has been set by Mavcom.

Q: Is the PSC refundable if travellers missed or cancelled their flights?

Having not gone to the airport and used the airport, you have every right to claim the PSC charges. You can fill up a form and claim it back from the airline.

Q: Please tell us about your industry initiative to manage the quality of airports: the Quality of Service (QoS) Framework.

We have just completed the shadow period of our QoS Framework, which is part of Mavcom’s efforts to further empower consumers while enabling the development of a robust civil aviation industry.

Similar to the Penalty & Compliance Matrix for airlines which is part of the MACPC, the QoS subjects airport operators to a financial penalty if they do not meet key performance indicators (KPIs) highlighted under the QoS.

The KPIs laid out in the framework include cleanliness, queue times, quality of infrastructure, wayfinding, among others.

The minimum is the airport must have a QOS. Some airports can be better, nobody is preventing that.

The basis of RAB is used to deliver the service quality and that is the principle to calculate PSC at any airport. The PSC must commensurate the service provided.

Q: Certain parties and individuals were quite vocal to criticise Mavcom in recent months. What is your response to them?

People have every right to say what they want to say about us. But don’t question our integrity or undermine our ability as a regulator. If there are any problems, you can go to court and sue us. That’s okay. Right now there is no litigation against us by any party.