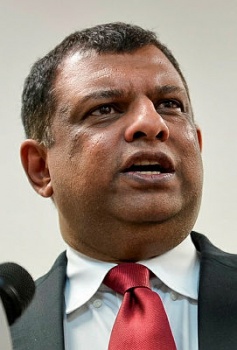 AirAsia Group chief executive officer Tony Fernandes (pix) lamented that the facilities provided at the airport, which was built to replace the previous Low-Cost Carrier Terminal (LCCT), did not match that of KLIA.

He questioned whether klia2 was indeed a full-service terminal after MAHB had in a statement claimed that it was a second permanent terminal for KLIA.

"If it (klia2) is full service, then where are the same facilities at KLIA? The train escalators (travelator), passenger comfort, and others?" he replied in a brief message to theSun today.

MAHB had, on Monday, said klia2 was not a budget terminal but a second permanent airport to KLIA, claiming that this was the understanding it had with the government.

The airport operator said this approach was necessary to accommodate the country's current and future capacity requirements and growth.

The statement came after an uproar over the decision to standardise the passenger service charges (PSC) between KLIA and klia2 beginning next year.

Malaysian Aviation Commission (Mavcom) had revised the PSC, with passengers taking international flights to non-Asean destinations from klia2 to be charged RM73, up from RM50, effective Jan 1.

DAP lawmaker Tony Pua, meanwhile, questioned MAHB's stand, pointing that a section of a brochure from the firm's own website had labelled the airport as being positioned to be the "biggest terminal for low-cost carriers in the world".

"So which is right? The marketing brochure on its website or the latest statement to deflect blame from the massive hike for PSC at klia2?"

"Regardless of whether MAHB wants to call klia2 a 'hybrid airport' as it did earlier in 2013, or a second permanent terminal for KLIA, the fact remains klia2 has at all times been intended specifically to serve as a new low-cost carrier terminal," he said in a statement.