Checks by the New Straits Times at klia2 showed that the departure hall was filled with tourists and holidaymakers.

Reporters including the foreign press have been camping at the airport as early as 8am to check on the situation and wait for new developments.

Attempts by reporters to get more information from potential witnesses such as Starbucks staff, information counter personnel and staff from outlets near the crime scene were fruitless as they kept mum over the incident.

The foreign press, however, were given 10 minutes to take photos and videos around the departure hall but were soon advised to leave as they starting harassing passengers and airport personnel. 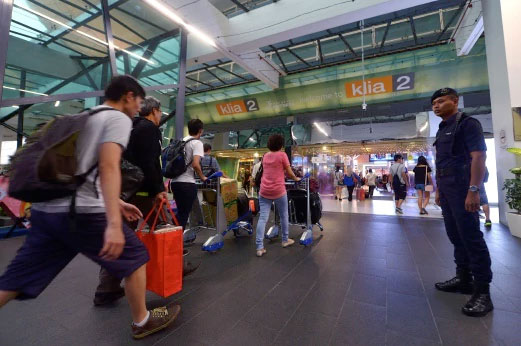 In the area where the incident took place, four closed-circuit televisions (CCTV) were spotted. Several auxiliary police and airport officers were also seen monitoring the area.

A source from Malaysia Airports Holdings Berhad said more security officers have been deployed to monitor the situation.

Security has been beefed up with an increase of security personnel including plainclothes police officers to ensure the safety of the public.

The source also added that as the case is still under investigations, no additional details were revealed.

A check at the taxi terminal, where the two female assailants were believed to have hailed a taxi after the alleged murder, was also operating as usual.

A taxi driver, who declined to be named, said he was aware of the news but did not know of the taxi driver who was arrested.

It has been reported that on Monday, Jong-nam was due to board a morning flight to Macau when an unknown woman wiped his face with a cloth, laced with unidentified liquid.

After complaining to airport staff of diziness, he was rushed to the Putrajaya Hospital, but died en route.

The assassin was captured on CCTV, which showed that she was waiting for a taxi. The taxi driver was arrested by the police to assist with investigations and was later released.

Inspector General of Police, Tan Sri Khalid Abu Bakar confirmed that police have detained a Vietnamese woman was arrested at the klia2 today to assist with investigations.

He said the woman has been identified as Doan Thi Huong, 29, from the Nam Dinh province in Vietnam.