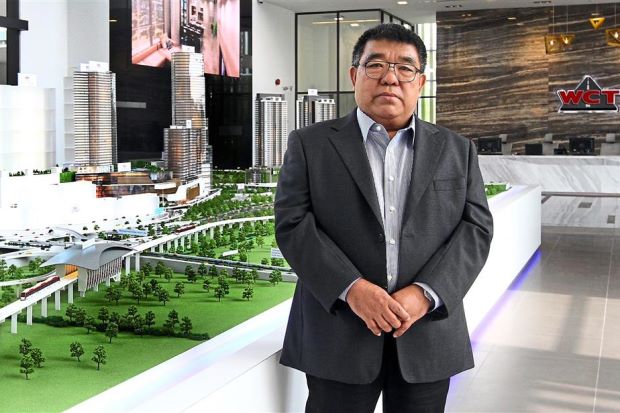 Taing: ‘For a start, we intend to raise RM500mil to RM600mil from the construction unit’s IPO.’

Managing director Taing Kim Hwa reiterated that the company would undertake a series of corporate exercises to achieve this, in preparation for future land bank acquisition and expansion of recurring income through its property investment and management businesses.

“Some plans down the pipeline include an initial public offering (IPO) for our construction arm to unlock the value of the construction business and injection of WCT’s property investment and management businesses into a real estate investment trust (Reit), both of which will substantially lower our balance sheet.

“For a start, we intend to raise RM500mil to RM600mil from the construction unit’s IPO. We are now engaging with the regulators and clearing the necessary guidelines before making an official announcement. We target to complete the IPO before the end of the year,” says Taing in an interview with StarBizWeek.

Notably, such corporate developments will put WCT in a similar situation as Sunway Group, which successfully listed its construction arm and raised RM2.74bil back in 2015. According to a report by Hong Leong Investment Bank, WCT’s current net gearing is 78.9%.

With both IPO and REIT exercises as well as a disposal of 50% of the group’s Serendah land stake, these initiatives are expected to reduce its net gearing to 40%.

Meanwhile, WCT is targeting to complete its Reit by the end of this year.

After a lengthy delay, the move to list its Reit makes sense, given that most of its malls have matured.

The group’s objective is to develop a total net lettable area (NLA) of 5 million square feet. Currently the total NLA of Paradigm Mall PJ, Aeon Bukit Tinggi, and Paradigm Mall JB would amount to 3 million sq ft. These malls are to be injected into the Reit that it plans to launch.

“Next year, we expect more income from the property investment sector, as some of the properties would have reached their maturity. For example, the three major mall properties, which are gateway@klia2, Paradigm Mall Petaling Jaya, and Aeon Bukit Tinggi, Klang, are doing well.

“Thus, we are confident about launching Paradigm Mall Johor Bahru by end of this year as we have secured anchor tenants like Sogo and Village Grocer,” says Taing.

WCT will also include Gateway@klia2 into the Reit, if the authorities allow it, given that it is a 35-year concession awarded by Malaysia Airports Holdings Bhd.

Besides that, WCT is in the process of tendering for construction projects worth a total of RM10bil to RM20bil for the next six months to one year.

From this amount, the group aims to secure RM2bil to RM3bil worth of projects for calendar year 2016.

The group is currently involved in an infrastructure project in Qatar, which includes roadwork and bridgework.

In anticipation of the 2022 FIFA World Cup in Qatar, WCT hopes to tender for more infrastructure projects. Apart from that, the group expects to hold a preview launch within the next two months for the first phase of its freehold condominiums, as part of its upcoming KL South integrated development.

“If all goes well, the first phase of the condominiums, which entail 419 units, is expected to contribute significant revenue to the group’s earnings for the year end.

“Should the economy improve or there are less challenges ahead, then we will launch the remaining 940 units,” adds Taing.

The retail mall will measure 2 million sq ft in NLA.

“With an estimated gross development value (GDV) of RM8bil, Paradigm Garden City is seen as an attractive development due to its planning and accessibility, having five entry and exit points, respectively. “The location is especially attractive as the development is within the vicinity of a larger catchment area consisting of consumers with high purchasing power,” says Taing.