Barely months into its operations, Rayani Air has come under fire from Malaysians online for its poor handling of a walk-in job interview session, which was held at klia2 yesterday. 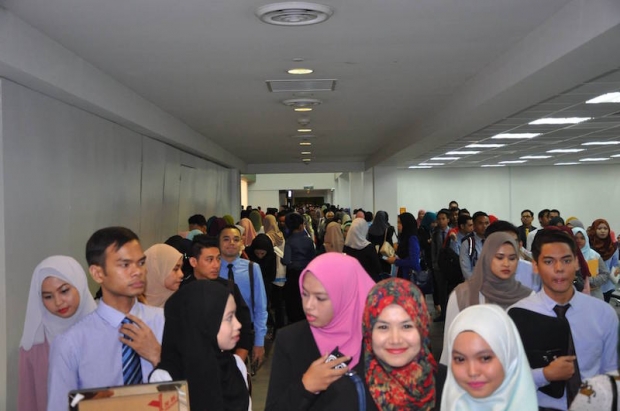 Some of the candidates who turned up at the interview session yesterday. — Picture via Facebook.com/RayaniAir

Taking to Facebook to vent their frustration, many candidates who turned up at the interview session complained about the airline’s “rude” staff, as well as being turned away with no explanation given after queuing up for hours.

Some also claimed that the interview session was poorly managed, which eventually resulted in some candidates being made to leave the venue due to overcrowding.

Most of the complaints were posted on Rayani Air’s Facebook page, after the Shariah-compliant airline posted pictures of the interview session.

“The staff are very rude and are yelling and accusing people of cutting queue, which they are not,” said a Facebook user, Balqis Qis.

Balqis alleged that the staff had refused to accept the resumes of some candidates and turned people away based on skin colour, among others.

Another Facebook user, Muhammad Iman, said that Rayani Air should have been clear in its advertising about the kind of candidate it was looking for and not use “the excuse” of being a new airline.

“The interview was such a mess. You can’t even manage an interview but they want to manage an airline?” Nurliza Isnin asked.

“They refused to see my resume. Merely flipped three pages, and then closed it,” said another user by the name of Naora Adachi.

Rayani Air has since issued an apology on its Facebook page over the handling of the interview session.

“Upon respecting the orders and regulations from airport officials, Rayani Air had to turn down many promising candidates who came for our walk-in interview,” it said.

It said the crowd was “uncontrollable” and pledged to handle such interviews better in the future.

“We sincerely apologise from the bottom of our heart for the inconvenience caused today,” the airline added.