The display was to notify customers that security tamper-evident bags (STEB) for liquids, aerosols and gels (LAGs), are only provided for purchases made at the Eraman Malaysia duty free outlets. 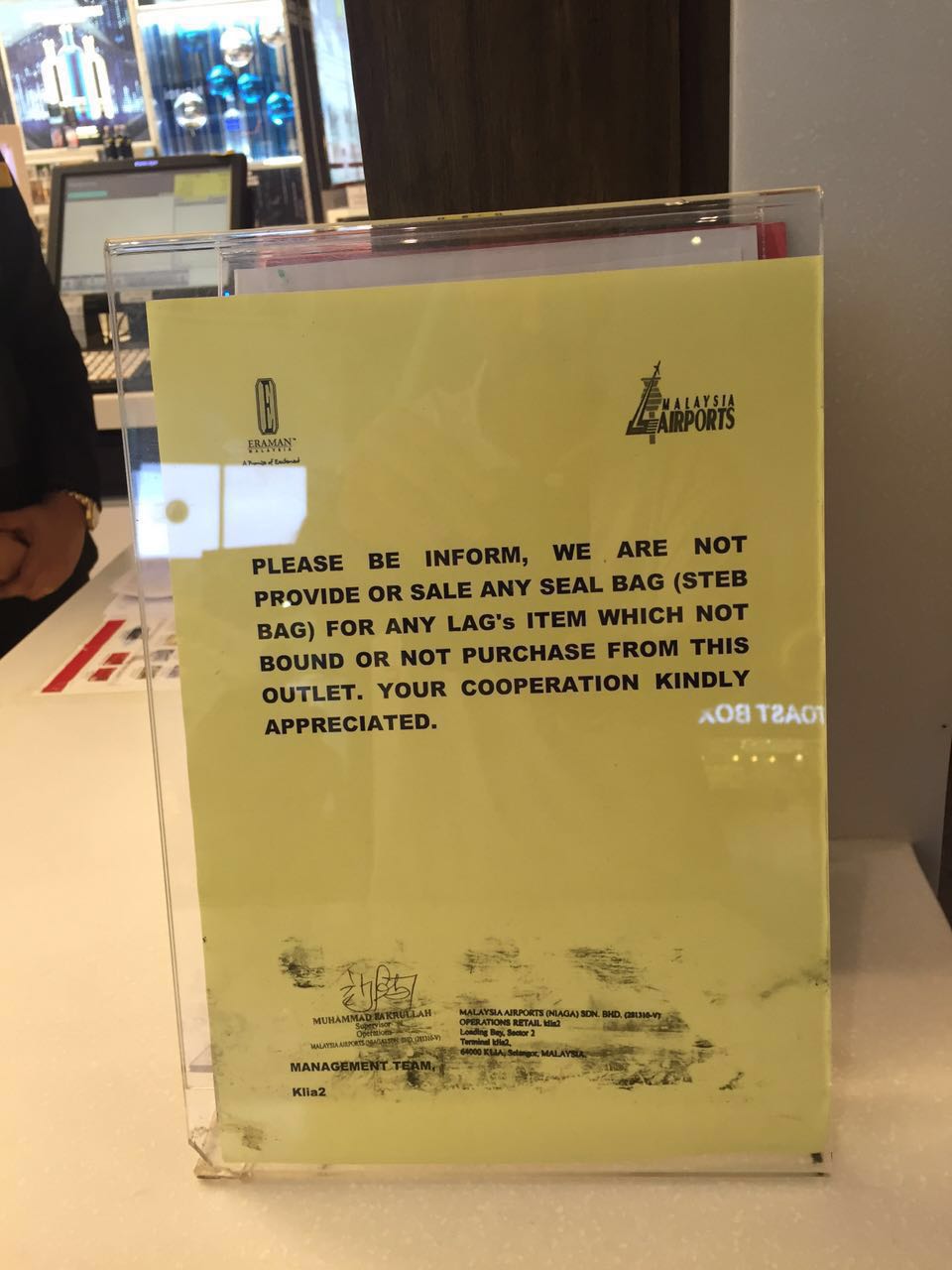 A picture of a notice put up in a duty free shop at klia2 which was plagued with grammatical errors was recently sent to Malaysian Digest by a loyal reader.

The plastic surgeon who frequently commutes via the airport and wishes to remain anonymous, told us that he took the picture of the notice during one of his business trips from Kuala Lumpur to Jakarta, to which he described as ‘utterly embarrassing’ seeing such poor display of English language used in a point of entry for tourists.

Calling it a ‘schoolboy error’, the reader condemned the notice which was clearly signed and approved by the airport’s operations supervisor from its management team, and also stamped by Malaysia Airports (Niaga) Sdn Bhd.

He pointed out how this showed that important notices such as these were not thoroughly vetted through and carefully approved prior to printing and displaying them on the counters.

Furthermore, he noted that such errors would only tarnish the reputation of the companies that endorsed the notice as the Malaysia Airports logo was clearly printed alongside the Eraman Malaysia logo in the display.

As a member of the Commonwealth countries where English is frequently used as a medium of communication in our everyday lives, and unlike other Southeast Asian nations like Cambodia or Vietnam, he claims such amateur mistakes should have not occurred as it would create confusion among travellers who rely heavily on notices and signboards to navigate their way in the country.

He then stressed that such cases as these is an affirmation that there is lack of emphasis on the importance of English usage in schools, when it is declared as the second most important language in the country after the Malay language. English is also the main international language, and said to be the language of progress and development.

Even the Sultan of Johor, Sultan Ibrahim Ibni Almarhum Sultan Iskandar is an advocate of English-medium education, due to the poor English proficiency in Malaysia. In an interview, the Ruler also highlighted that young people and civil servants are unable to converse in the world’s lingua franca. “Yes, English is in danger of becoming the language of the older people while the young cannot speak English proficiently,” he said.

In this case, perhaps what the management was trying to convey in its notice, should sound something like this:

“Kindly be advised that we do not provide or sell security tamper-evident bags (STEB) for any liquids, aerosols and gels (LAGs) items purchased outside of this duty free outlet. Your cooperation on this matter is highly appreciated.”