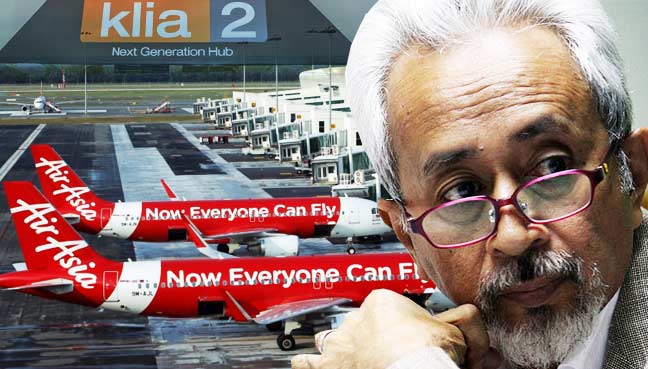 Our Prime Minister is also our Finance Minister. So whatever the Government headed by the Prime Minister, who is the nation’s leader, decides should not be a cause for any confusion, right? Unfortunately, that is not the case.

In the klia2 dispute that is in the news lately, there are strange noises that are coming out as if from a broken jet engine.

The statement from Malaysia Airports Holdings Berhad (MAHB) Managing Director Badlisham Ghazali that klia2 is not a low-cost carrier terminal seems to have shocked most people except us, the opposition parliamentarians.

We had asked for answers in Parliament why an originally-intended budget airport, which was supposed to have cost RM1.7 billion, had eventually increased in cost to RM4 billion. Nobody from the Government seemed to care or bother to give us a satisfactory explanation.

The building which was originally supposed to be only two storeys high then became five storeys. The floor area increased tremendously to become a sprawling shopping complex.

We questioned in Parliament why the airport was moved from the original site in the north that was a firm hard ground to the problematic west ground which is a soft and swampy ground.

As a direct result of the move, the earthworks cost escalated from about RM35 million to RM860 million and despite all the money spent and work carried out, the costly ground settlement problems continue until today.

However, now the MAHB MD contradicts the Government by confirming it is not a low-cost carrier terminal. No wonder the rakyat is confused and fed up.

We can understand Tony Fernandes’ frustration in trying to bring in more tourists into Malaysia with AirAsia and the Government’s incoherent policy and equally irresponsible wasteful spending at the rakyat’s expense.

Tony’s “Frankenstein” description of klia2 is appropriate since nobody is sure what this “Monster” is supposed to be – a budget or non-budget airport.

Malaysians are confused and appalled by all these arguments and wasteful spending. What is very clear is that there seems to have been virtually no cost and quality control in the construction of klia2 in critical areas.

The costs that exploded from the initial RM1.7 billion to RM4 billion was already an example of shockingly poor budget management.

The inexplicable move to construct it on a problematic land area that caused the earthworks alone to increase from RM35 million to an incredible RM860 million is scandalous.

The most shocking thing is that we are continuously paying for perpetual repair work on the runway-apron area and that is dangerous to moving aircraft and can cause a high risk of fuel leakage to spill over onto the surface of the apron areas.

Perhaps MAHB’s statement that it is not a low-cost carrier terminal is an understatement. The original cost had balooned up and today, years after completion, taxpayers are still paying for ongoing repairs.

As far as the costs are concerned, it is up up and away and the sky is the limit. Does anyone know what accountability is supposed to mean?