AHB built a RM4 billion airport at klia2 when all AirAsia wanted was a RM2 billion LCCT. 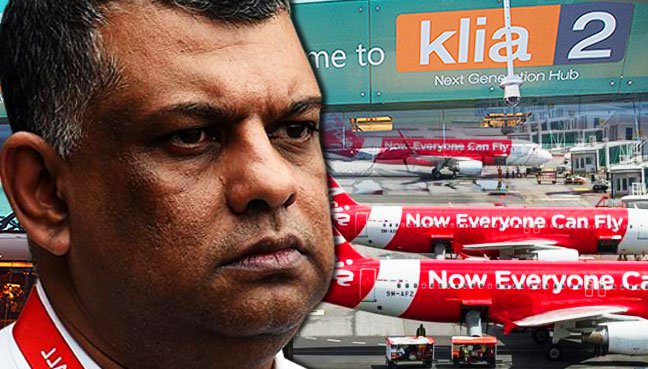 “If MAHB does not want to call klia2 low cost, it should build a proper one ‘so we can create more jobs’.”

klia2, he added, was not integrated and has no hybrid airlines but only low cost with AirAsia making up 98 per cent of the traffic. “The rest are low cost carriers too.”

The worst comment he heard was that MAHB had invested so much money in klia2 and so needs to raise airport charges. “Why did it build a RM4 billion airport?”

MAHB “promised the Cabinet that there would be no need to raise airport charges.”

He has complained in a recent update on Facebook that he was really frustrated with MAHB. “Malaysia needs economic growth.”

He went on to say that AirAsia can help transform Kuala Lumpur and Negeri Sembilan.

Fernandes was commenting on an article, “MAHB sees clearer skies ahead”, in The Edge. “I am not sure whether to laugh or cry.”Briefly, he wanted to stress that MAHB cannot charge passengers for their “grandiose schemes”. He lamented that the company built a RM4 billion airport at klia2 when all he wanted was a RM2 billion LCCT in Labu, Negri Sembilan. “We projected a new LCCT at klia2 would only cost RM1 billion.”

“Yes, our terminal (klia2) is not a low cost terminal while it was supposed to be one.”

Instead, he added, the terminal that was built at klia2 was neither premium nor low cost. “The problems are huge.”

“They can be shopping and property successes and regional corporate centres.”

He reminded that AirAsia was able to grow from two planes to what it is today because of low cost. “Putting up airport tax will destroy a great vision for the country.”

“We are now catching up with Changi. Transit is growing.”