AIRASIA Bhd is all set to start its low-cost hub campaign at the Kuala Lumpur International Airport 2 (klia2) as it aims to turn the terminal into a low-cost carrier (LCC) hub in Asia.

Aireen, who was appointed to head AirAsia on July 1 2012, hopes the new promotion would start as soon as MAHB gives the green light.

The new promotion is expected to start this year not only in Malaysia but also in other destinations within AirAsia’s network, including China, India, Indonesia and Thailand.

“By having this campaign and branding, people will immediately associate AirAsia and Kuala Lumpur with LCC hubs, a great way to travel, cheap airfares and that sort of thing.

“We (AirAsia and MAHB) already have an agreement on how it should be called. Now it’s just for us to go on that branding campaign and also for them (MAHB) to be able to endorse it and work with us,” Aireen told Business Times during her courtesy visit to the New Straits Times Press last week.

The promotion is also aimed at recapturing Malaysia’s position as the LCC hub in Asia from Thailand’s Don Muang International Airport.

“Right now it’s overtaken by Don Muang International Airport but we feel that we can take them on. In order to take them on, we need the support from various parties,” said Aireen.

In June, AirAsia group CEO Tan Sri Tony Fernandes told the New Straits Times in an interview that the airline planned to turn klia2 into the Dubai of Asia by promoting the terminal as a one-stop destination in the region.

That led to a disagreement between AirAsia and MAHB, with the latter stating that klia2 is Kuala Lumpur International Airport’s (KLIA) second terminal and a crucial component of KLIA hub in Sepang.

MAHB added that although klia2 was mainly used by LCCs, it was designed to cater to all types of airlines — both budget carriers and full-service airlines — as it supports the overall KLIA capacity.

klia2 was built to replace the previous LCCT due to AirAsia’s massive expansion and rising passenger numbers.

The terminal, which started operations on May 2 2014, is fully built, owned and operated by MAHB.

The feud between AirAsia and MAHB had added to a series of disagreements since klia2 started construction in 2009.

However, their relationship today has improved, with both AirAsia and MAHB working together on the new klia2 branding and promotion.

“We are still trying to improve the relationship. It takes two to tango. I think both parties have to recognise who is the customer and what the customer needs in order to grow,” said Aireen.

She also said both parties needed to work together towards achieving the 45 million passenger traffic target at klia2.

“Therefore, airport authorities have to work faster to cater for the needs of airlines so that we can build that number of passengers quickly. That should be the aim and that should be two parties’ mindset. Their minds should be aligned towards that,” added Aireen. 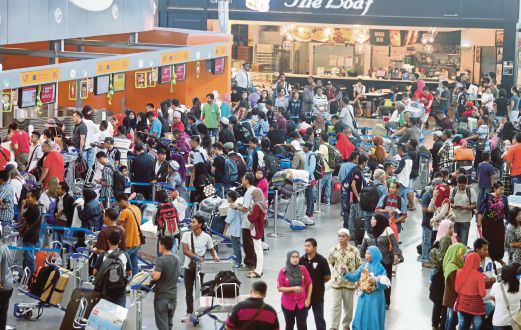 AirAsia says the promotion at klia2 is targeted at recapturing Malaysia’s position as the LCC hub in Asia from Don Muang International Airport. Pic by Mohd Fadli Hamzah