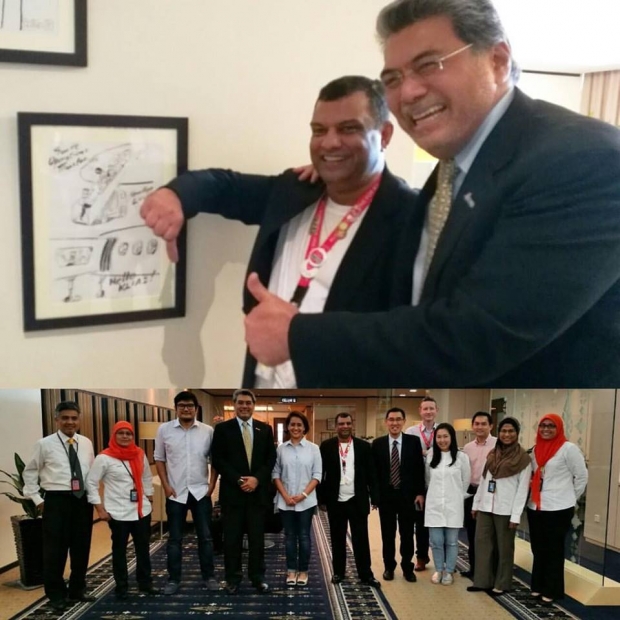 The AirAsia Group CEO has been engaged in a bitter fight with the airport operator over terminal facilities and even the name of klia2 in Sepang, the country’s main gateway from which his budget airlines flies and lands.

“Historic day. First time in MAHB office. Deciding to put the past behind us,” Fernandes posted on his social media feeds this afternoon.

He also included two photographs, one featuring a posed shot with MAHB managing director Datuk Badlisham Ghazali and the second a group shot believed with representatives of AirAsia and MAHB, presumably in MAHB’s office.

Fernandes disclosed that the visit included a “big” meeting in which both parties discussed how to resolve their long-standing dispute over the terminals, especially klia2 which the AirAsia boss aims to turn into “the Dubai of Asia”.

He credited the peace process to the MAHB boss, praising Badlisham although misspelling the name as Badlishah in his postings on Facebook and Instagram.

However, he added that the resolution process will not be easy, indicating that Badlisham may face internal challenges to sway the MAHB management and board towards their mutual thinking and “leave the past behind”.

“But after 15 years I see light with malaysia. Airports [sic],” Fernandes said.

The low-cost airline premised on the motto “Now, everyone can fly” has been seeking to take back Malaysia’s position as Asia’s budget travel hub from Thailand’s Don Muang Airport by rebranding klia2 as a low-cost terminal earlier this year, drawing ire from MAHB who disagreed with the name.

MAHB, which is in charge of 39 airports nationwide, insisted that it was wrong to promote klia2 as a low-cost terminal as it also catered to other full-service airlines even though most carriers were budget operations.