The Transport Ministry (MOT) has played down safety issues at the main terminal bulding of klia2, and dismissed talk of further delays, claiming that the delay in issuing a Certificate of Completion and Compliance (CCC) for the terminal should be resolved "within two to three weeks".

On Feb 4, 2014, contractors UEM Construction Sdn Bhd and BinaPuri Sdn Bhd (UEMC-BinaPuri) said it did not manage to secure the CCC which it had initially committed to acquiring by Jan 31, 2014. 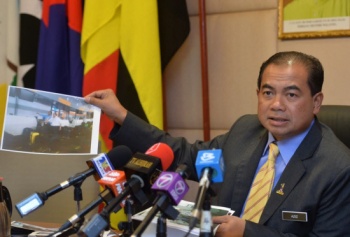 Aziz at the media briefing on klia2‘s progress in Putrajaya yesterday.

"The contractor made an error where the fire and safety features are not compliant with Fire & Rescue Department’s standards so they were asked to do rectifications. Hopefully it can be done within these two to three weeks."

"The major construction of the terminal is completed. The only issue is the fire and safety features which have been installed but need some rectification," deputy Transport Minister Datuk Ab Aziz Kaprawi told reporters during a hastily called briefing at the Ministry’s office yesterday.

Various media had reported that the main terminal building was plagued with fire safety, road and drainage and sewerage pipe issues.One issue highlighted was the cracks which appeared on sewerage pipes for klia2.

Aziz however claimed that the cracks found do not affect the issuance of CCC for the terminal nor the operational readiness and airport transfer (Orat).

While one source opined that it could have been due to too much pressure during the "compacting of soil", another said it could be due to movement of soil.

Aziz said even though Orat officially started on Feb 4, 2014, a few airlines had started familiarising themselves with the new terminal earlier.

He explained that the Orat procedure has been split into three phases in order to meet the May 2 deadline.The first phase, which is a preliminary Orat done by Malaysia Airports Holdings Bhd (MAHB) itself has already started, while the second and third phases will be done in March and April respectively.

Acting Transport Minister Datuk Seri Hishammuddin Tun Hussein meanwhile, has once again reiterated that it will stick to its May 2 deadline for klia2 to begin operations, assuring that it will be fully operational, with all stakeholders moved in.

"We will be operational on May 2 no matter what. The ministry will not entertain any requests for further extensions," he told reporters at the briefing which was delayed by more than one and a half hours, but lasted only 20 minutes.

Hishammuddin confirmed that the new terminal will be fully operational on May 2, 2014 with Customs, Immigration, airlines and retailers.

He also assured that he would personally monitor the development at klia2, and conduct spot checks to ensure that everything is going to plan.

"During the spot checks, I will bring those who can assist such as the ministers concerned or CEOs of the companies involved so that it’ll be more specific…so I’m micromanaging to ensure at least on the ministry’s side, we’ve done everything in our power to ensure the public is satisfied that a project of this iconic size fulfils the right standards and transparency," Hishamuddin added.

This is the third time he has chaired a briefing on klia2 since setting up the task force led by Aziz to ensure the timely completion of klia2.

UEMC-BinaPuri has been incurring Liquidated Ascertained Damages (LAD) of RM199,445.40 per day since June 16, 2013 for not being able to complete its portion of the job as planned. It is unclear if the latest delay will incur more penalties for the JV partners.

RHB Research Institute Sdn Bhd analyst Ahmad Maghfur Usman said in his note to investors prior to the briefing by MOT, that should klia2 see a delay of one quarter in the opening date of klia2, the revenue loss to MAHB from rentals collected and lower passenger spending is estimated at RM48 million, or 1.6% of its estimated RM3 billion topline.

"This could potentially shave 10% off our FY14 earnings estimates (RM33.6 million), thus reducing our FV to RM9.61 (from RM9.80). Note that we have not factored in the daily fine (of RM199,445.40 per day) that MAHB could potentially collect from the JV partners for each day of delay since June 16, 2013 (totaling RM45m to date). MAHB guided that this will offset the construction bill, which management says will be within the RM4 billion budget allocated for the airport," he said.