Acting Transport Minister Hishammuddin Hussein must explain how he concluded that klia2 was 98% complete and will open on May 2, when there are several defects in the main terminal building, said Lembah Pantai MP Nurul Izzah.

Hishammuddin had said on Jan 13 that the airport terminal would be issued the Certificate of Completion and Compliance (CCC) by end of January. 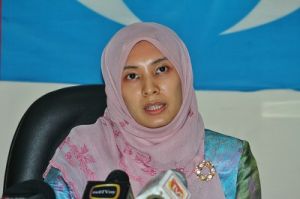 Nurul said the further delay of klia2’s opening as well as its failure to comply with fire and safety standards had put Hishammuddin Hussein in the spotlight.

“The minister must explain to the public why he made the statement, which contradicts the findings of government agencies which examined the building,” Izzah said in a statement today.

Nurul said the Sepang Municipal Council, Fire and Rescue Department and Indah Water Konsortium found that 75% of the main terminal had not complied with safety and fire standards.

“Checks by those agencies also revealed cracks in a sewerage pipe and part of the road as well as the drainage not fit for use,” she said, citing The Star.

The recommendation of the agencies was essential for issuing the CCC.

It was reported this could signal another delay in the opening of klia2, which had already missed several deadlines. The last one scheduled for April 30 had been postponed to May 2.

“Is the minister just repeating the assurances given by the contractors UEMC-Bina Puri without taking into account reports from relevant agencies?” she asked.

“If two-thirds of the main terminal building has not complied with the standards, then the construction work is shoddy,” said Nurul.

She said she would propose in the coming parliament session that a Parliament Select Committee compromising representatives from both Pakatan Rakyat and Barisan Nasional be set up to examine the klia2 issue.

The committee would ensure that the airport, touted as Asia? largest low-cost air terminal, complied with international safety standards as well as monitor the costs of the construction, she said.

She added that in July 2013, the people were shocked by an announcement by the Deputy Transport Minister that construction costs had ballooned from RM2 billion to RM4 billion.

Minister: To open as scheduled

In another development later in day, Hishammuddin gave his assurance that the klia2 will open as scheduled on May 2, dismissing reports that there were serious doubts on the opening date of Asia? biggest low-cost air terminal.

He said the delay to obtain the certificate of completion and compliance (CCC) would not defer the opening of the low-cost carrier terminal.

Malaysia Airports Holdings Bhd said yesterday that it has not received the CCC for the kila2 terminal building from the main contractor, UEMC-Bina Puri.

klia2 has missed several deadlines for opening with the last one scheduled for April 30 before being moved to May 2.

Hishammuddin said the government would not entertain any request to postpone the opening and that spot checks would continue to be conducted.

Focus would be placed on issues that are preventing the klia2 from being opened as scheduled.

“If there are any quarters who deliberately try to obstruct our plans, I will not hesitate to take action,” he told a press conference today.

Asked if klia2 was ready to undergo operational readiness and airport transfer (ORAT), as required three months ahead of the opening, Hishammuddin said it can be carried out immediately.

“ORAT can take place now but this does not apply to CCC, in fact the testing on the baggage system has to be done… instead we are looking at ORAT, certificate and so on, to me the bigger picture is by May 2, klia2 will begin operations,” he added.