Malaysia Airports Holdings Bhd (MAHB) hopes to increase its non-aeronautical revenue to 55 per cent from 50 per cent now by 2020. 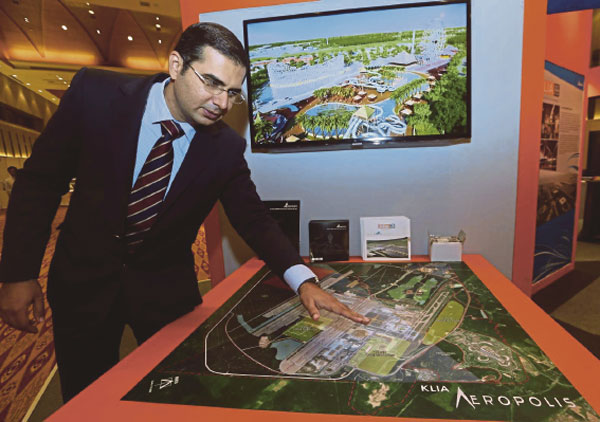 It plans to achieve this by developing cities around the Kuala Lumpur International Airport (KLIA) in Sepang under a six-year business plan dubbed Runway to Success 2020.

The development of airport cities is the way forward for airports the world over as they become more reliant on non-aeronautical business to drive revenue, said MAHB general manager for corporate planning, Randhill Singh.

He said the “old way” of churning out revenue, mainly through aeronautical businesses such as infrastructure-related charges, including aircraft landing and take-off fees, aircraft parking charges and passenger services fees, cannot be sustained as they are either regulated, contracted or a combination of both.

He said income from the aeronautical businesses will remain an important revenue stream for airports but most will be looking to increase non-aeronautical contribution through business diversification.

“Airport cities is the way forward for many airport operators around the world. It is the latest concept.

A long time ago, cities used to be built near harbours, then railway stations and today, it is  the airports,” Randhill said in an interview during the World Airport Cities Conference and Exhibition 2014, here, recently.

“Aeronautical charges are heavily regulated and you can see how airlines are fighting to reduce the charges. Though we are already among the lowest in the world (in terms of aeronautical charges), we have provided incentives of around RM70 to RM80 million a year to airlines,” he added.

MAHB, one of the global pioneers of airport cities development, has about 10,050ha in Sepang, some of which was used to build KLIA, the Low-Cost Carrier Terminal (LCCT), Sama-Sama Hotel, airline cargo area and the newly built Kuala Lumpur International Airport 2 (klia2).

The remaining area was used for non-airport related businesses, such as oil palm plantation in the 1990s, which has given the airport operator satisfactory yearly profits.

“Our focus back then was to build airportrelated infrastructure. We also had to wait for the surrounding areas in Sepang to mature first before we could move on to the next phase, which was commercial development,” Randhill said.

MAHB’s first attempt at commercial development is the Gateway@klia2 at klia2, which is a 70:30 joint venture between MAHB and WCT Holdings Bhd.

The other commercial development under way is the Mitsui Outlet Park KLIA. The joint venture between MAHB and Japan’s Mitsui Fudosan will be the largest factory outlet shopping mall in Southeast Asia with 25,000 sq m of commercial area, which targets KLIA and klia2 passengers and also population in surrounding areas like Nilai.

The airport operator recorded a passenger growth rate of 18.1 per cent in the first quarter of this year, outpacing the expected 9.7 per cent. This translates to 20.6 million passengers at its 39 airports in Malaysia.

Both international and domestic passenger movements recorded a strong 14.9 per cent and 21.5 per cent growth, respectively.

Meanwhile, Randhill said MAHB plans to use up to 1,206ha in Sepang for commercial purposes by 2020.

The airport cities development, he said, will be an ongoing project.

“Our new vision is to be a global creator of airport cities. Runway to Success 2020 is our next six-year business plan,” he added.

Randhill said the next immediate plan for MAHB is to develop air cargo logistics at the existing LCCT area, adding that the development could start in the next one or two years.