Small, strategically-placed indoor billboards around klia2 are being used to counter criticisms about the new airport and its price tag.

“The public will be our judge,” said a Malaysia Airport Holdings Berhad (MAHB) official, who declined to be named, when asked about the billboards yesterday. 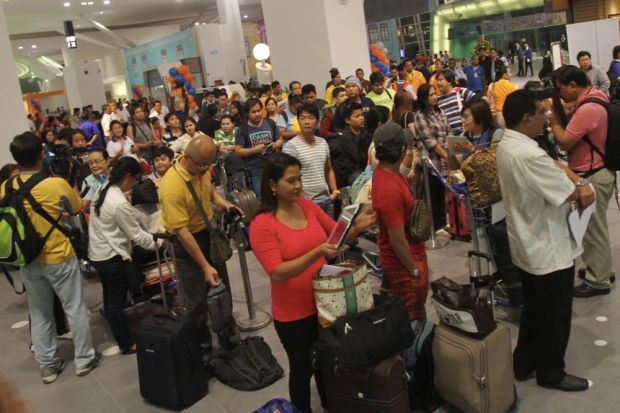 Crowd lining up at the new klia2.

Visitors at the airport’s departure gates were greeted by the advertisement campaign including one entitled “RM2bil to RM4bil for a Bigger and Better klia2. Not a Cost Overrun”.

The billboard also included info-graphics on the original versus current design along with what was envisioned of the airport in 2009 and what had been built.

klia2 was originally scheduled to open three years ago, but had been plagued by delays, safety concerns and costs which had reportedly doubled.

However, the ad campaign highlighted that klia2’s capacity of 45 million passengers was double that of the Low Cost Carrier Terminal (LCCT) and had 220 shops compared to just 60 at LCCT.

Another billboard stated that klia2 was 23% cheaper to build than the LCCT and indicated that the cost for the new airport was just RM4,280 per sq m, compared to RM5,567 for LCCT.

Another billboard stated that MAHB has the lowest charges in the world.

Its infographics pointed out that the aerobridge charges since 1981 had been 25 sen per domestic passenger while airport tax was RM6 per domestic departing passenger.

Earlier last month, AirAsia Group had said security and safety issues needed to be addressed first before it moved.

AirAsia is the anchor tenant for klia2, accounting for more than 80% traffic.

The low-cost carrier is scheduled to move to the new airport by May 9, when all operations ceased at LCCT. Four airlines – Malindo Air, Cebu Pacific Airways, Lion Air and Tiger Air – have started operating from klia2.