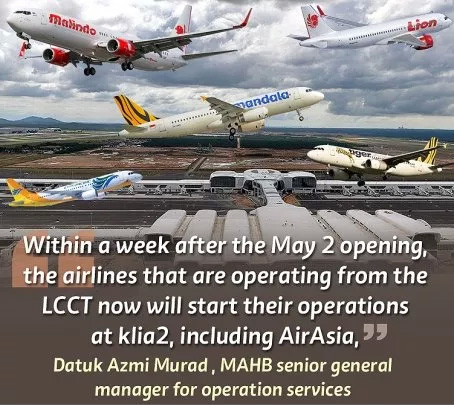 Its senior general manager for operation services Datuk Azmi Murad said MAHB will stick to its plan of opening the country’s first hybrid airport with full flight operations, which should include AirAsia Bhd and other airlines previously operating from the low-cost carrier terminal (LCCT).

“We are working on the plan together with the other airlines to ensure everything runs as scheduled,” he told Business Times on Thursday.

“Within a week after the May 2 opening, the airlines that are operating from the LCCT now will start their operations at klia2, including AirAsia,” he added.

AirAsia, in recent reports, had been quoted as saying that it would not move to klia2 on May 9 due to security and flight operation concerns.

In response, Prime Minister Datuk Seri Najib Razak said the low-cost carrier must move to klia2 as scheduled, and that the government, through MAHB, was prepared to listen to the airline’s concerns regarding the transfer.

RHB Research opines that AirAsia has the bargaining power in this situation, given its huge fleet.

However, Hong Leong Investment Bank Research does not expect AirAsia to stay long at the LCCT.

“Should AirAsia group insist on staying in the LCCT for a long period, other low-cost carriers (LCCs) may take advantage of the situation and add capacity aggressively, such as new routes and additional frequencies.

“Those LCCs may also attempt to hog the preferred time slots at klia2,” it said in a research note recently.

AirAsia X chief executive Azran Osman-Rani, when asked on the issue, said on the sidelines of the Entrepreneurs’ Conference TEC2020, here, yesterday: “I think it’s best to speak to (AirAsia chief executive officer) Aireen Omar because we’re doing this as a group. So I prefer if Aireen addresses all the issues on klia2.

“I’m not going to answer any questions on klia2. Aireen is going to speak for the group on the matter,” he said.

Earlier on Wednesday, AirAsia executive chairman Datuk Kamarudin Meranun said the group would, at one point, be shifting its commercial flight operations to the new terminal but could not confirm the exact date.

“What I can confirm is that we will move (to klia2) when everything is okay. Let’s not deliberate on that,” he said on the sidelines of a dialogue between the prime minister and about 50 corporate leaders and captains of industries on sustainability and diversity.