klia2 looks set to be delayed yet again.

About two thirds of the main terminal building have yet to receive approval from the relevant authorities because they were found to be not ready for public use. 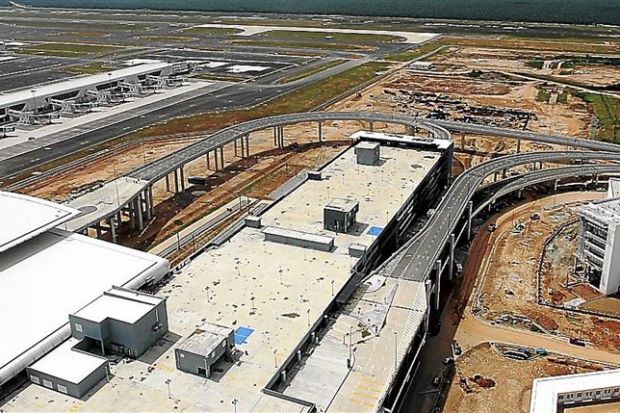 Not ready for the public: Site inspection found that 65% of the main terminal building did not comply with fire and safety standards.

Indah Water Konsortium Sdn Bhd, the Sepang Municipal Council and the Fire and Rescue Department inspected the building in the last week of January and found that 65% of the main terminal did not comply with fire and safety standards.

There are cracks in a sewerage pipe outside the terminal, and parts of the road and drainage are not fit for use.

Their recommendation is essential for the issuance of the Certificate of Completion and Compliance (CCC).

Yesterday, Malaysia Airports Holdings Bhd said in a statement that it has failed to receive the CCC for the klia2 terminal building from UEMC-Bina Puri.

This is despite assurances from the main contractor, UEMC-Bina Puri Joint Venture, that it will hand over the terminal building or hand the CCC to the airport operator by Jan 31.

This potentially signals another delay in the opening of Asia’s biggest low-cost air terminal scheduled for May 2 after almost a year of delays.

MAHB said it would continue to engage with UEMC-Bina Puri on the next course of action in regard to the issuance of the CCC and the commencement of operational readiness and airport transfer or ORAT.

It added: “All efforts are being taken to support UEMC-Bina Puri JV towards the completion of the terminal building to enable the opening of klia2 on May 2, 2014.”

In a separate statement, UEM-Bina Puri confirmed it could not obtain the CCC by Jan 31 and claimed that this was due to an “unexpected issue” which occurred recently during a follow-up inspection.

“The JV partners have discussed and are working with MAHB, the authorities, consultants and architects to rectify the matter and rectification works will commence immediately. Public safety is the main priority, thus, we will ensure proper rectification works are diligently carried out.

“At the same time, UEMC-Bina Puri JV will work together with MAHB on the next course of action in regard to the issuance of the CCC and the commencement of ORAT,” it added.

Rectification works will take about three to four weeks to complete and even though the contractors are scheduling for another test to be conducted by the Fire and Rescue Department in two weeks, any delay in getting the building certified fit will have an impact on the opening of the airport.

“There have been so many promises and assurances given by the contractors, yet they failed to get the CCC. There are now concerns if they can even obtain the CCC by the end of February,” said an industry source.

The klia2 task force chaired by Deputy Transport Minister Datuk Abdul Aziz Kaprawi met yesterday to deliberate on the reasons why the CCC was not obtained. It is not known if the contractors will be penalised for failure to secure the CCC.

On Jan 13, Acting Transport Minister Datuk Seri Hishammuddin Hussein visited the airport and said klia2 would be ready on May 2.

“The project is now 98% complete and all parties are working hard 24/7 to meet the deadline,” Hishammuddin said at a press conference at the site.

He had said the project was expected to receive the CCC – given by the architects, engineers and building draughtsman registered with the Board of Architects Malaysia – by the end of the month.

klia2 has missed several deadlines for opening with the last one scheduled for April 30 before being moved to May 2.