Its chief executive officer, Aireen Omar, says that there are issues involving klia2 that needs to be resolved before the budget airliner can shift its operations

AirAsia and AirAsia X will continue to operate from the low cost carrier terminal (LCCT) despite the government’s announcement of its closure on May 9. 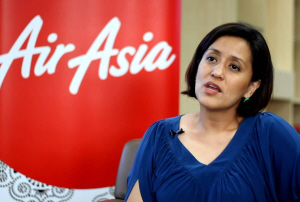 “The move to klia2 is imminent. However, it will only be carried out after all issues are addressed.

“We appeal to the prime minister, for the benefit of the 12,000 AirAsia staff, for a fully functional airport,” said Aireen.

Yesterday, it was reported that LCCT will be closed down on May 9, a week after klia2 open for operation, which is on May 2.

“And AirAsia will have to move its operations to klia2 by then,” Deputy Transport Minister Abdul Aziz Karpawi was reported saying.

However, Public Accounts Committee chairman Nur Jazlan Mohamed said that AirAsia will only move to the new facility at a later date due to several unresolved issues.

Aireen said that Ikram Premier Consultings’ (Ikram) has revealed depressions on the taxiway/apron and runway, which would be operationally disruptive, especially with AirAsia having 400 aircraft movements a day.

She also said that the short period of two months for the Operational Readiness & Airport Transfer (ORAT) was unrealistic and overly-optimistic for AirAsia.

“The last ORAT transfer by AirAsia from KLIA Main Terminal to LCCT in 2006 took longer than two months when the airline was significantly smaller.

“There are also other key commercial, operational and contractual issues which are still under discussion between Malaysia Airports Holdings Berhad (MAHB) and us, which needs to be resolved first before shifting to klia2,” said Aireen.

Meanwhile, Deputy Transport Minister Datuk Abdul Aziz Kaprawi when asked to comment on AirAsia’s stand, said: “I cannot comment first. We will see on that day.”

“We will see on that day,” was all that Aziz said on the sidelines of the Airport Cities Conference and Exhibition 2014 hosted by the Malaysia Airports Holdings Bhd (MAHB), reported Bernama.

Asked whether AirAsia would have enough time for the operational readiness and airport transfer (ORAT), he said: “We will see.”