For some travellers, yesterday’s transition to klia2 meant a mad rush from KLIA or LCCT to catch connecting flights or just to board, with some missing their flights.

Lowie Tie Mer Sma, 27, from The Netherlands, said he missed his flight to Jakarta as he was not informed that he would be boarding at klia2 instead of the KLIA terminal. 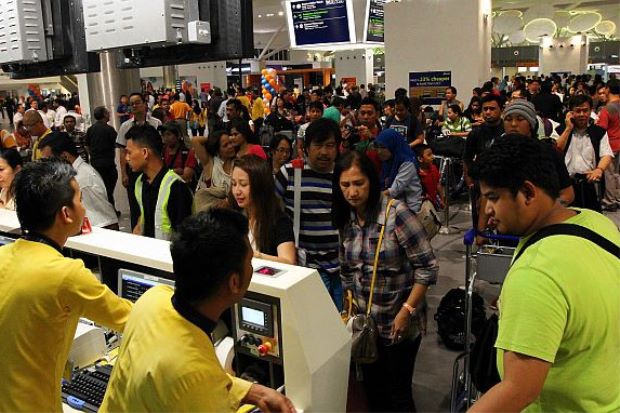 Passengers of Cebu Pacific Air to Manila, which was the first aircraft to take off from klia2, checking in.

“I arrived at KLIA about 11am from Phnom Penh, Cambodia and was supposed to fly to Jakarta at 1pm (local time).

“It took quite some time for me to clear the Immigration and collect my baggage, and as I was queueing to check-in for my next flight, the airline officer told me that my connecting flight is actually at klia2.

“The confusion caused me to miss my flight,” said the passenger of Lion Air.

Lowie said he quickly took the connecting ERL to the new terminal, but was still too late.

“I was so disappointed that the airline did not inform me earlier about the switch,” said the traveller who had to pay RM70 to board the next flight to Jakarta.

Housewife, Siti Suraya Sudar, 46, who was flying to Kuching, Sarawak, said she nearly missed her flight as she was not aware of the changes.

“Luckily we arrived at the airport much earlier, and the whole family had to take a taxi to klia2.

“We landed at KLIA from Kuching earlier and we thought that it will be the same.

“The airline never contacted or emailed us about the change and explain where we should board our plane,” she said.

A Russian traveller, who wanted to be known as Olga, 26, said she was confused about her boarding terminals.

“This is my first time in Malaysia and I had no idea how to get around. The airline did not inform me earlier about the changes and I had to rush to the new terminal.

“Other than that, there was no problem with the airport,” said the finance officer.

“We advise travellers to always double check with their airline where they are supposed to board to avoid any confusion,” he said.

Apart from that, Azmi said the airport had served about 2,000 passengers by noon and all the arrivals and departures had gone on well.

“There was no glitch with the baggage system.

“We are thankful that the opening went smoothly and we would like to thank all the stakeholders for making it happen,” he said.