Gemma Camarinta was the first person to check in for her Cebu Pacific Air flight.

The scene at the klia2 on the first day of its opening was just like a typical day at any other commercial airport. 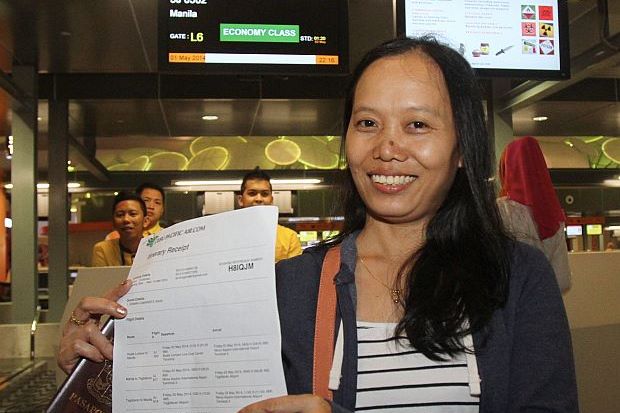 Gemma Camarinta was the first person to check in for her Cebu Pacific Air flight.

Travellers were seen strolling through various parts of the airport purposefully as passports and bags were checked in accordance to the usual procedures.

There was not yet a great crowd at the airport as only four airline companies were operating from the klia2 on opening day – Malindo Air, Cebu Pacific Airways, Lion Air and Tiger Air.

There were also few waiting taxis and buses at the klia2 transportation hub.

While passengers are few, retail outlets are treating the phenomenon as temporary.

Many retail outlets at the Gateway@klia2 were already in business, with most displaying congratulatory floral bouquets at the front to mark the opening of the shops.

When fully occupied, the Gateway@klia2 shopping complex can accommodate up to 180 shop units featuring restaurants, fashion and beauty outlets, and even a grocery outlet, among others.

Gateway centre manager Vincent Chong said the shopping mall was designed to cater not just to travellers’ needs, but also to shoppers from the neighbouring areas of the new airport.

“We offer a mall inside an airport but we are different from a regular airport mall which concentrates more on travel retail. Our tenants are reflective of a normal shopping mall located in a city,” Chong said when met at the airport yesterday.

Another exciting feature to come to the Gateway@klia2 would include a container hotel to give travellers a quiet place to take short naps or to freshen up for a minimal fee.

Chong said the concept of the hotel is similar to the Japanese capsule hotels, and it is estimated to be fully constructed by the end of the month.

Gateway@klia2 is strategically located near the carpark section instead of after the passenger check-in point, making it accessible to even to non-travellers.

For reporter Lee Yen Mun, a regular visitor to LCCT, the presence of mobile customer service representatives at klia2 felt like a breath of fresh air.

“Hello, good morning. How may I help you?”, came the polite voice of a woman by the name of Mishra, who smiled and gave a slight bow as she approached some seemingly lost or bewildered airport users on opening day.

Like several of her colleagues roaming the spanking new klia2 building, Mishra (who declined to give her full name) was specially trained to keep a lookout for disoriented travellers at the airport.

These mobile customer service representatives would also receive passenger feedback to be conveyed to senior management for improvements.

“We are constantly walking around and will attend to queries from airport users.

“There could be both compliments and complaints, but our goal is to bring improvements to the klia2,” said Mishra, who sported a cheerful bright orange scarf with her signature blue jacket that is part of her uniform.

“I must admit that I was excited at the sight of the new airport,” said Lee, who welcomed the many retail outlets at the airport.

“They were already beckoning potential customers to enter with their bright lights, shiny floor, and attractive discounts, while the carpark bays were spacious and well-lit, while there was strong presence of uniformed security guards,” she added.

A total of 7,000 passengers are expected to fly in and out of the airport daily during the initial phase of operations, and this number is expected to increase to 50,000 from May 9 onwards with AirAsia’s arrival.

In a statement, Malaysia Airports Bhd said a total of 42 flights and approximately 6,300 passengers had arrived and departed at klia2 as of 5pm yesterday.