MALAYSIA Airports Holdings Bhd (MAHB) has received variation order (VO) claims from several contractors of the low-cost carrier terminal klia2, which may raise its cost to RM4.6 billion, a person with firsthand knowledge on the matter says.

Rumour has it that MAHB received VO claims of more than RM250 million from contractors who were asked to extend runway3, raise earthworks and upgrade public infrastructure.

The amount, however, does not take into account the VO claim of around RM300 million expected from UEM-Bina Puri joint venture (JV).

An MAHB official, however, told Business Times that all the VOs have been accounted for and approved by the airport operator. 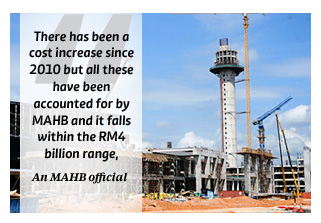 MAHB had awarded 53 work packages to build the klia2 terminal building in Sepang, Selangor, in 2010. It is learnt that more than 120 contractors, involving sub-contractors and consultants, are involved in the project. The main contractor, UEM-Bina Puri JV, has a RM997.2 million contract.

“There has been a cost increase since 2010 but all these have been accounted for by MAHB and it falls within the RM4 billion range,” he said. The official, however, was not able to comment whether the UEM-Bina Puri JV’s VO has been accounted for. The JV won the contract to build the main terminal and satellite buildings, a sky bridge and four piers. The contract value rose due to new MAHB requirements, which include a larger terminal building with additional check-in counters and a fully-automated baggage handling system.