MALAYSIA Airports Holdings Bhd (MAHB), which has come under fire from all sides for the delay in the completion of airport project klia2, is pointing the finger at AirAsia Bhd, government agencies and the main contractor.

The delay has been mainly due to changes to the design of the airport and its size – it was initially meant to handle a passenger volume of 30 million but this was scaled up to 45 million.

The baggage handling system, for example, was changed at AirAsia’s request while the control tower had to be relocated on the advice of the Department of Civil Aviation, MAHB senior general manager Datuk Azmi Murad tells The Edge.

The Immigration Department also requested the separation of in-bound and out-bound passengers, which resulted in the single-storey unitised building morphing into a multi-storey mega terminal.

But even with the changes, the contractor UEM-Bina Puri JV should have completed the job by June this year, remarks Azmi. In fact, it had assured MAHB that klia2 would be ready by then, although the airport operator had had its doubts, he adds.

"We sent the JV warning letters and the chairmen of both the companies met to discuss the problem. We told them we didn’t think they could complete the project [without putting in more resources]. We asked if they wanted to revise the date, but they said no, they didn’t need it.

"They are reputable contractors and have the resources to do the job. They were very confident they could deliver," Azmi recounts.

On May 16 this year, UEM-Bina Puri JV informed MAHB that the project would be delayed, so the completion date was pushed forward to May 2014 (see table below). 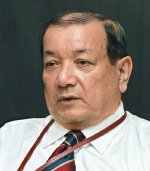 Azmi: The reason is that the contractor could not deliver

The airport operator, which took over as project manager from KLIA Consult in November 2011, has been blamed for the delay and higher cost of completing klia2, a terminal dedicated to low-cost carriers.

Opposition leaders and AirAsia CEO Aireen Omar have called for an independent probe into the project, which is now estimated to cost about RM4 billion compared with slightly over RM2 billion when it started in 2010.

As for the contractor, it has been slapped with liquidated and ascertained damages of RM6 million a month until the completion of the terminal in April 2014.

Claiming that it is not on a fault-finding mission, MAHB says it is clarifying things because the company has been slammed for supposedly not managing the project well.

"We cannot point fingers and say who should be at fault for the delay. We are not defending ourselves, but so many things have been said about the project that we feel the need to clarify. The reason is that the contractor could not deliver," Azmi points out.

"Maybe the contractor underestimated the difficulties, especially in making the building watertight. If it had started earlier, it could have settled the problem. As it is, this could only be resolved at end-June. Now, it needs another three months to finish the job."

According to Azmi, even though the scope of work for klia2 was extended, most of the subcontractors managed to deliver on time except for UEM-Bina Puri JV, which has the mandate to build the main terminal building.

The JV was awarded the contract in 2010 after it met all the technical and commercial specifications for the job and was the lowest bidder. A major hiccup for it was the baggage handling system in the terminal, which is said to have held back the project by at least six months.

According to Azmi, the system had to be changed to fully automated following a request by AirAsia, although the airline had initially preferred semi-automated. This is probably why

AirAsia was thought to have contributed to the delay of klia2.

The changes aside, says Azmi, the terminal could have been operational by end-June. ?ith the increase in scope of work, the completion date was pushed to April this year. That delay was justified because more time was needed to complete a bigger terminal. But from April 2013 to May 2014, that cannot be justified. The contractor is at fault."

He denies that the airport operator accommodated AirAsia when it came to the building of the terminal, adding that it had a social obligation as an airport manager. For example, MAHB was adamant about having aerobridges at klia2 for the convenience of passengers, although AirAsia protested strongly.

"We also have our views and stance. An airline did not want air-conditioning at the LCCT, but we can’t do that," says Azmi, adding that a spa and museum were two items listed on AirAsia’s wish list that MAHB could not grant.

He says MAHB needs to take into account the potential growth of the industry and the fast-evolving business model of low-cost carriers. He also denies that as the project manager, MAHB has been complacent about dealing with its contractors and refutes allegations that the delay was deliberate.

MAHB has issued 212 non-compliance reports progressively to UEM-Bina Puri JV since it started construction on the main building, observes Azmi.

He says all the contractors, including UEM-Bina Puri JV, were given extensions of time until June 15 to finish their jobs with operational readiness and airport transfer.

Apart from the LAD, says Azmi, there are still disputed variant orders between MAHB and UEM-Bina Puri JV in relation to soil issues, which amount to some RM89 million.

Extensions of time granted to the contractor

This article first appeared in The Edge Malaysia Weekly, on July 1, 2013.