The low-cost carrier terminal (LCCT) in Sepang is little more than a ‘Bus stop’ or pasar malam, which is why the new airport, klia2, has to be completed as soon as possible, say tour agencies. 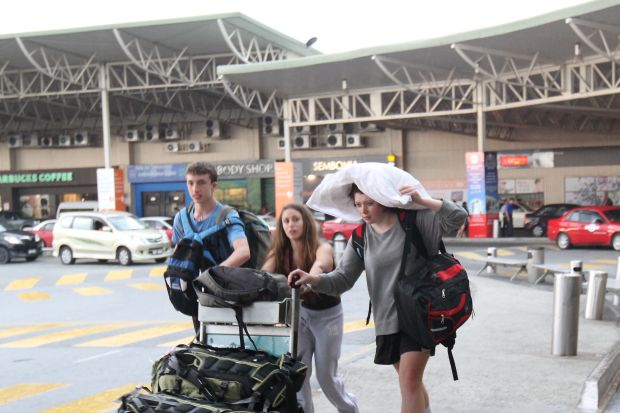 Out in the open: Foreign tourists running for shelter after getting caught in the rain at LCCT, where there’s no
covered walkway. Many people have become sick with the lack of quality facilities at the terminal.

The Malaysian Chinese Tourism Association (MCTA) said many tourists were unhappy with LCCT because it was ‘too messy’ and ‘congested’.

“I do not know why the opening of klia2 is being delayed again. We have been waiting very long for it to be completed,” said MCTA president Paul Paw, adding that the delay was affecting the country’s tourism industry and image.

“When it rains, passengers at LCCT have to use umbrellas to get to the aircraft because the pathway is not covered.

“It is so crowded and messy that we often say it is more like a bus stop than an airport,” he said.

Yesterday, The Star reported on the current pace of work at the klia2 site, raising questions on whether its contractors could meet the revised opening date of May 2, 2014, which comes after five earlier delays.

Malaysian Indian Tour and Travel Association president K. Thangavelu said the delay in the completion of klia2 and the lack of facilities at LCCT were “tarnishing the country’s image”.

“It is the first impression for tourists, especially those visiting the country for the first time and who do not know we have better airports like KLIA.

“Tourists from India who, upon arrival at LCCT, have told me that their airports back home are so much better than the ones in Malaysia,” he said.

Thangavelu added that it was also unfair to passengers, who despite paying airport tax, were not provided with top-notch facilities.

“If LCCT was meant to be a temporary airport, it has been that way for much too long. The completion of klia2 must be as soon as possible. We cannot afford more delays,” he said.

Meanwhile, a taxi driver who only wanted to be known as Tan, 55, said LCCT was more like a pasar malam (night market) than an airport.

“I dread going to LCCT. The traffic there is so haphazard and it’s packed with people all the time,” he said.