The troubled klia2 mega project must be completed by April 30 next year, and become operational by May 2, said Datuk Seri Hishammuddin Hussein. 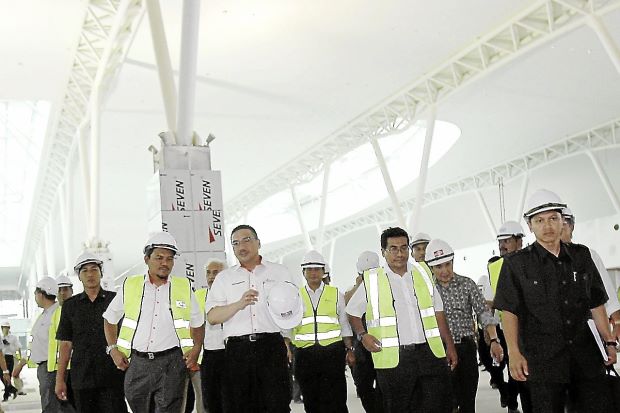 Hishammuddin, accompanied by MAHB officials, visiting the klia2 in Sepang.

A special committee in the Transport Ministry which will be set up soon will monitor progress.

No more delays to the RM4bil low-cost carrier airport would be tolerated, added the acting Transport Minister.

“They cannot miss this deadline. I would find it unacceptable, and as long as I am acting minister, I will utilise every resource at my disposal to ensure that this project is completed on time,” he added.

The special committee will assist airport operator Malaysia Airport Holdings Bhd (MAHB) as well as the project’s contractors to resolve any problems that could prevent klia2 from being completed on time.

To be headed by Deputy Transport Minister Datuk Abdul Aziz Kaprawi, the special committee will include senior officers from all ministries related to the project.

The special committee will also study whether there is a need to rope in an independent auditor to investigate more closely the problems that have arisen which have led to the project’s delay and increasing cost.

Hishammuddin said the special committee would brief him on its work every week and provide the public with more information relating to the progress of the project.

On the cost of klia2 which reportedly started with a price tag of RM1.9bil before ballooning to RM4bil, MAHB in a statement released during Hishammuddin’s visit said that it was due to an increase in the scope of the project to cater to the stakeholders’ requirements.

The new airport’s runway has also been lengthened from 2.5km to 4km while the number of boarding gates has been increased from 55 to 68.

MAHB said the RM4bil cost was inclusive of government facilities and infrastructure such as a control tower, elevated highway, express rail link platform and utilities amounting to RM600mil.