Improvements have been made to klia2‘s design because “it does not mean that a person who travels on a low-cost carrier need not arrive or depart from a very nice terminal”, said Malaysia Airports Holdings Berhad (MAHB) chief.

Its managing director and CEO Tan Sri Bashir Ahmad added that in view of public appeals especially by people with restricted movements, the elderly, expectant mothers and children aerobridges would be installed at klia2.

“We hope the airlines operating at klia2 will support our decision by using the aerobridges to meet the needs of the travelling public,” said Bashir at a press conference yesterday.

He added that the airport operator would go ahead with the building of aerobridges (to connect airplanes to the terminal gate) despite the refusal of a low-cost airline to use them.

When the new low-cost terminal is completed, it will be equipped with facilities to cater to passenger comfort, including a public shopping mall and a fully automated baggage handling system.

Other facilities are an airside transit hotel, premium lounges, as well as a seven-storey parking lot which will be able to accommodate up to 6,000 vehicles. 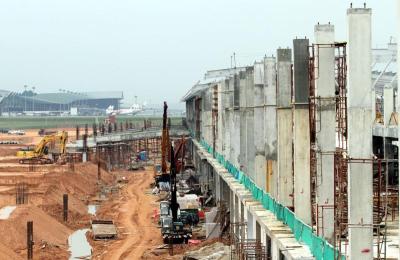 Work in progress: Construction works are ongoing at klia2 in Sepang. The new low cost terminal will be equipped with facilities to cater to passenger comfort, including a public shopping mall, once it is completed.

Bashir said klia2 had been significantly upgraded in terms of floor space, the length of its runways and the number of aircraft stands.

All these improvements resulted in an increase of the terminal’s building cost from a provisional budget of RM2 billion to between RM3.6 billion and RM3.9 billion.

The upgrade of the baggage system to a fully automated one had also resulted in the delay of the terminal’s estimated date of completion from October next year to April 2013.

However, Bashir insisted that the cost of the terminal, estimated at RM5,000 per sqm, would be among the lowest compared to other similar airport terminal projects.

Bashir also said the passenger service charge for klia2 would remain the same as the current tax imposed at the low-cost-carrier terminal (LCCT).

When the terminal is completed, it will be made accessible via the Express Rail Link (ERL), taxis, buses and in the future, even via the KTM.

The terminal will have the capacity to serve up to 45 million passengers annually. This is three times the capacity of the existing LCCT.

He also twitted about the RM3.9 billionlion figure, saying that “I am sure that is not the final figure”.