The new low-cost air terminal, or klia2, that is taking shape next to KLIA will nearly doubled its original size and will cost nearly twice its initial costing of RM2 billion to between RM3.6 billion and RM3.9 billion.

The increase in the size and cost will cater to 45 million passengers and is being built by Malaysia Airports Holdings Bhd (MAHB).

Speaking to the media yesterday, Bashir said the new airport was 40% complete, would have a 4km runway instead of the earlier planned 2.5km, a fully-automated baggage system, a new air control tower, 68 gates and eight remote stands.

The original size of the two-storey terminal building was 150,000 sqm but to cater to government requirement to segregate domestic and international passengers, it has been upgraded to nine storeys on a 257,000 sqm site. 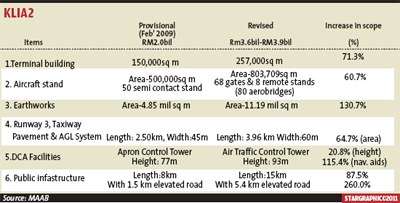 It will have the most modern facilities and amenities to cater to future growth.

Base on the original design the airport could only cater to 30 million passengers.

Bashir also announced that the airport would have aerobridges and it was up to the airlines to use them. This is a decision the majority of the travelling public has been waiting for but AirAsia boss Tan Sri Tony Fernandes poured cold water on it by saying yesterday that “we will not use the aerobridges.”

MAHB has come under fire over allegations of cost over-runs and delivery dates but Bashir said that “KLIA is built as a national infrastructure asset to cater to the needs of airlines, Government, public and the airport.

As a result of these requirements, klia2 has been significantly upgraded with superior facilities compared with the original design.”

Bashir added therefore the issue of cost over-runs did not arise.

He cited the runway and baggage system as a case of requests made by airlines and to meet that meant additional investment and time taken to expand the runway. It is also increasing commercial space by 50,000 sqm.

“The longer runaway allows airlines to cruise longer and use less fuel,” he told a packed room of reporters who were earlier taken for a tour of the klia2 construction site.

Similarly, the adding of a fully-automated baggage system had also pushed the timeline to 2013 from October 2012 and the request, he said, “only came in June this year.”

For that the terminal building needs to be hacked and that involves the size of a “football field.”

Commenting on the higher cost of the new airport, Bashir said “when you increase the scope by so much, certainly cost will be incurred. We are building a better place and it will be the icon for low-cost travel in the world.”

He added that it was not uncommon to change the design when construction was ongoing.

Bashir also denied the notion that the higher cost to build a bigger airport would result in higher passenger service charges (PSC) for KLIA. He said it would remain the same as the current low-cost carrier terminal (LCCT). The fees were regulated by the Government and the next review was only in 2014. The Government allowed MAHB to raise the PSC recently and a RM7 increase for LCCT to RM32 was obtained after a nine-year request.

Contrary to suggestions that public money is used to build KLIA, Bashir said MAHB was funding the project.

“We are even paying the Government to build the public infrastructure and air control tower costing RM530mil,” he said.

MAHB, which has a AAA rating from RAM Ratings, has only drawn down RM2.5 billion from the RM3.1 billion raised from the sukuk it issued.

“We have several options in terms of raising additional funds including internal funds, debt and going to the equity markets,” chief financial officer Faizal Mansor said when asked how MAHB will source for more funds to complete the job. Bashir expects MAHB to break even almost immediately when klia2 opens for commercial operations.

He said MAHB had also completed earthworks for “AirAsia to have its building with apron access and this is a special dispensation. It would also have its own parking facilities and Tune Hotel. We have tried as much as possible to meet the requirements of our partners. We have also been very professional with our partners.”

The entire project has 42 contractors. Asked why the need for so many, Bashir said it was part of the stimulus package. The airport will have a Express Rail Link with the potential to be connected to KTM in the future

Asked to comment on a report that he would be replaced, Bashir said: “How would you like me to answer that?”