The new structure will set token prices by distance with discounts of between 17% and 35% per trip for cashless riders, said transport company Prasarana.

Prasarana is in charge of RapidKL which handles the Ampang and Kelana Jaya LRT, KL Monorail and its own brand of city buses. 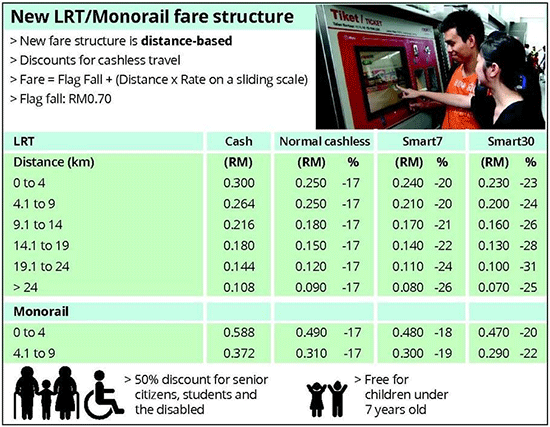 The review, he said, was to get all RapidKL train lines on the same fare page, adding that there were different fare types for each line today.

Prasarana also believed that a discount cashless system would ease its operations and get more people riding the trains.

The new fares will not mean higher prices across the board, with some trips costing the same or even less.

For example, a trip from Pasar Seni to Cempaka by LRT which costs RM3.40 today will cost RM3.60 for token users on Dec 2. But those using MyRapid or Touch n’ Go cards will be charged RM3.20 for the same trip.

Moreover, Prasarana is coming up with a special weekly and monthly discount service that can be loaded onto MyRapid cards. Under the same trip, the weekly load will cost RM3.10 while the monthly one will cost RM3.

“The formula will be a basis for us to use when we will start to operate the MRT line later on,” Azmi said, referring to the Sungai Buloh-Kajang line, which will be ready by 2017.

Senior citizens, students and the disabled will qualify for 50% discounts, while children six years and below can ride for free.

Cashless cards, Azmi added, are already used by some 62% of RapidKL riders. A complete fare table is expected to be made public in the near future.