KTM Komuter fares will be up from next month, with the highest increase being RM7.10 for a single trip.

The fare hike, which was put off in May, will take effect on Dec 2.

KTM Bhd president Lt Kol (B) Sarbini Tijan said the fare would be increased by 4 sen per km for the Tanjung Malim-Sungai Gadut and Batu Caves-Port Klang routes.

A trip from Sungai Gadut to Tanjung Malim will soon cost RM19.20, an increase of 58%.

Even with the increase, Sarbini said they were still un­­able to cover operational costs with the 15 sen per km approved by the Govern­ment. 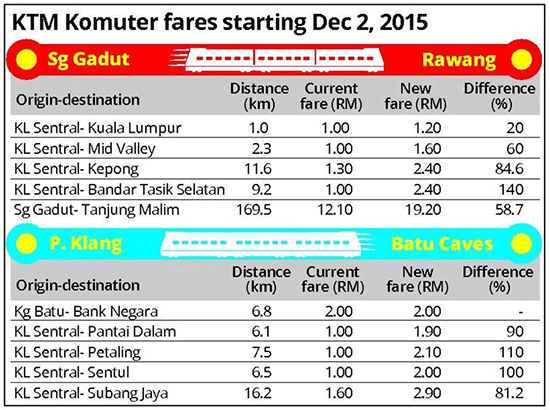 The cost savings will be used for a new automatic fare-collection system, a project to integrate a cashless framework for MRT LRT as well as the KTM Komuter and to install WiFi routers on its coaches.

Passengers using Touch ‘n Go cards can get up to a 20% discount, while those buying weekly tickets and monthly tickets can enjoy up to 20% and 30% discounts respectively.

Only KTM Komuter lines in the Klang Valley are affected by the revision. Fares for KTM Intercity routes remain unchanged.