After a swarm of bees converged on Kuala Lumpur International Airport 2 (klia2) on Jan 8 and caused a minor kerfuffle, another swarm made an appearance on Thursday – this time at the country’s main airport terminal. 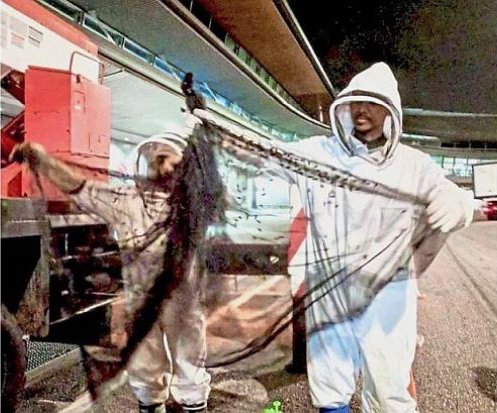 After having sighted them on Thursday afternoon, he and his team contacted experts to help relocate the bees.

“We will save you bees! Don’t worry, the experts, @penyelamatlebah, are here.

MAHB on its Twitter account said it had called in My Bee Saviour, an initiative by the Malaysian Agricultural Research and Development Institute (Mardi), to ensure they were properly relocated.

“Show your support and stay tuned for the rescue mission. #saveMYbees,” MAHB tweeted as the rescue operation went into full swing as night fell.

Then early yesterday, MAHB announced the bee rescue mission at KLIA had been a success, thanks to My Bee Saviour.

“These bee-saving specialists are definitely night-time superheroes in disguise.

“We will continue to care for all at the airport, including bees. Have a bee-utiful Friday!” MAHB tweeted.

MAHB certainly has taken its bee infestation problem in its stride, turning the criticism on Jan 8 by AirAsia Group’s chief executive officer Tan Sri Tony Fernandes into a public relations win with this latest move.

And they have obviously learnt their lesson – to the benefit of the new swarm of bees that will be moved to a new home.

In contrast, the earlier swarm was not so lucky.

In that earlier episode, MAHB said on Twitter it was a sad ending for the bees as the area was fumigated by its pest control team.