Malaysia’s connection to a multimillion-dollar trafficking network of endangered freshwater turtles and tortoises has been uncovered by a wildlife investigation group. 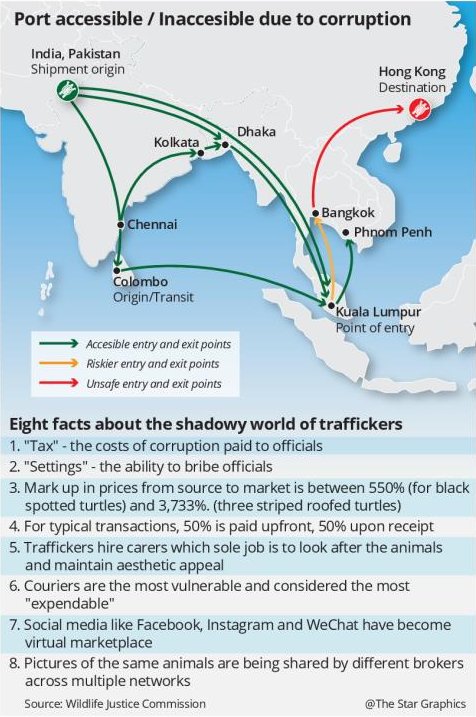 It resulted in the arrest of 30 people and the jailing of five others in Malaysia, while a suspect was subjected to the Interpol’s Red Notice after he absconded, believed to be the first for wildlife crime in the country. Some 200 potential “persons of interest” were also identified, while three more cases are ongoing in Malaysia.

The report highlighted the “consistent corruption” of officials at strategic airports and transport hubs in south and South-East Asia – which traffickers referred to as “settings” – and named both Bangkok’s Suvarnabhumi Airport and the Kuala Lumpur International Airport (KLIA) for featuring highly as “destination airports” in the past four years.

“Intelligence gathered does not suggest that Malaysia is necessarily the intended destination for illegal wildlife. Investigators observed several occasions when factions of the wider network had organised meetings in Malaysia for buyers operating in another country,” it said.

“This ‘tax’ was reported to be 50% higher in Bangkok than in Kuala Lumpur,” it said.

“Investigators established it was costing traffickers approximately US$1,800 to US$2,300 per bag to be safely smuggled past Customs at the Suvarnabhumi Airport.

“However, at KLIA and klia2, traffickers only needed to pay about US$900 per bag.”

Among a list of 14 countries, including China, Hong Kong and Vietnam, that investigators recorded instances of corruption, Malaysia ranked the first for having 11 different traffickers reporting that they had “settings” there on 16 separate occasions.

“One trafficker told investigators that a shipment of radiated tortoises was due to arrive in Kuala Lumpur but was delayed because the corrupt official was not on duty as expected.

“Kuala Lumpur was repeatedly reported as the easiest port to traffic wildlife into and out of,” it said.

In the undercover probe, Malaysia also ranked the second with the most number of individual animals offered or sighted – 3,398 – during the operation, behind only India with 9,833.

Among the species cited in the report are the black spotted turtles and radiated tortoises – both of which are prohibited from commercial trade under the Convention on International Trade in Endangered Species of Wild Flora and Fauna – and the Indian star tortoises, whose trade is restricted.