A New Zealand news website has questioned the authenticity of a letter purportedly written by a New Zealander that criticised the short skirt lengths of AirAsia’s flight attendant uniforms.

A news website has questioned the authenticity of a letter that criticised the short skirt lengths of AirAsia’s flight attendant uniforms. — Picture courtesy of Facebook

NZ Herald reported that there was no Dr June Robertson — the woman who signed off the letter with a Wellington address — registered with the Medical Council in Wellington.

The Kiwi news portal however, noted that there was a June Robertson registered as living at the address on the letter purportedly sent to Malaysian senator Datuk Hanafi Mamat, but no one was home when its reporters made a visit. 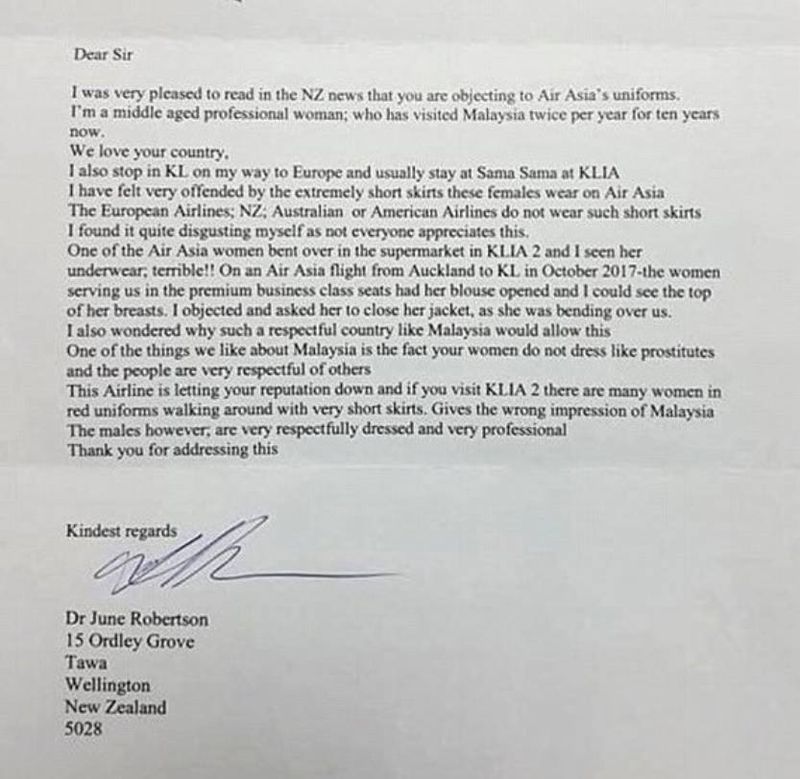 NZ Herald also reported that there was a “Dr June Robertson” on business and employment social networking site LinkedIn, but the profile was “suspiciously bare” and had no connections.

“Dr Robertson”, who described herself as a middle-aged professional woman, said in a letter filled with grammatical errors that she was very offended by the “extremely short skirts” worn by AirAsia flight attendants.

“One of the Air Asia women bent over in the supermarket in klia2 and I seen her underwear; terrible!!

“One of the things we like about Malaysia is the fact your women do not dress like prostitutes and the people are very respectful of others,” she wrote in her letter posted on Facebook.

klia2 is the satellite terminal of the Kuala Lumpur International Airport in Sepang from which most budget airlines are fly in and out.